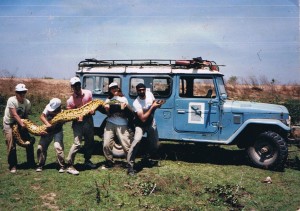 Each Halloween, I think back to the close calls I’ve had during a lifetime of work in zoos and the field. I suppose some, such as narrow escapes from a Kodiak Bear and an enraged King Cobra, would qualify as “near death experiences.” Others, i.e. wrestling huge Green Anacondas from Venezuelan swamps and mixing it up with a giant, wild-caught Reticulated Python, were dangerous but manageable, and have provided me with ample fodder for “war stories”.   I’ll summarize a few of these today. I’d also like to highlight Windscorpions, Hellbenders and other creatures that appear to be dangerous but do not actually deserve their fearsome reputations.

When you are lucky enough to send an entire lifetime working with creatures ranging (literally!) from ants to elephants, a few encounters that set the heart to full throttle are inevitable. In contrast to what you may see posted on social media by self-styled “adrenaline junkies”, serious professionals do not actively seek trouble – enough comes along on its own. Mammals, with their advanced abilities to plan and respond, demand special respect from zookeepers and field researchers, and are responsible for more injuries and fatalities than are other groups. My closest call came courtesy of a Kodiak bear that weighed-in at approximately 1,200 lbs. With one eye patched (another story!), I failed to notice an unlocked door when I moved the animal into its shift cage. I entered the main holding cage and began cleaning, noticing in passing that the light from the hallway suddenly dimmed, and then was back to normal. As my brain registered that there were no passing clouds to dim the light, I heard the sound of tools falling – and I knew what had happened.

I stuck my head out of the cage, and came face to face with the bear. It was in front of the nearest door (of course!), and stood up to its full 12 foot height as I appeared. My mad dash through the building, around corners and down 2 flights of stairs set some type of record I’m sure. The exit I reached had to be opened via a key but, amazingly the right one (on a ring with 15 others), appeared in my fingers as I reached the door.

I made the standard radio emergency calls, and NYPD was first on the scene. The officer, whom I knew well, patted his weapon and said all would be okay should the bear break through the building’s door before the big game rifles (always on site for emergencies) and anesthesia darts arrived. Then the beast’s huge head appeared at a window – the officer looked at his weapon and said “This would just make him angry” (that’s a cleaned-up version of his actual comment!).

Co-workers arrived and asked why I was holding a broomstick; I didn’t know, but must have instinctively grabbed it while fleeing the scene. “Toothpick for the bear” quipped the once again cocky police officer! Fortunately, the bear was drugged and returned to its cage without further incident, and I (somehow!) remained employed. Anesthetized animals that woke up unexpectedly – including a tiger that was beside me in a van and a polar bear with which I was temporarily sharing a shipping crate – also livened up my days at the Bronx Zoo. Wrestling animals into shipping crates was always risky – a guanaco treated me to several cracked ribs, and pygmy hippos, nyala antelope, bison and too many others to list here all did their best to exact their pound of flesh. Escaped gorillas, snow leopards, gibbons and others added to the excitement. I’ll detail these and others in future articles…until then, please post your own questions and observations below. 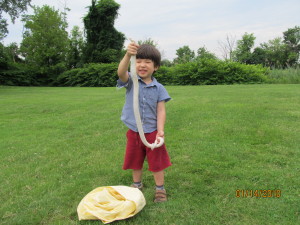 Three trips to capture and tag Green Anacondas in the Venezuelan llanos provided me with a lifetime of interesting and sometimes dangerous experiences. Accidentally grabbing an electric eel or stepping on a fresh water ray were actually the most risky aspects of the work, but the snakes did their best to leave their mark as well – as evidenced by the tooth that remains embedded in my wrist to this day (the resulting infection was far more serious than the bite itself). One especially aggressive anaconda grabbed a co-worker in what was undoubtedly a feeding attempt – you can read more in the article linked below.  Of course, as you can see from the photo above, many reptiles are harmless in the right hands…and at the right size!

Venomous snakes pose great risks to zookeepers, because we must physically move the animals in the course of servicing their exhibits. Special challenges were presented to me by Spitting Cobras that escaped after a visitor encouraged his son to kick-in the glass front of their exhibit, and by a King Cobra at large in an airport. Danger-wise, crocodilians are in a class by themselves – none more so than the fast, high-jumping and always feisty Cuban Crocodile. A pitched battle between 7 individuals and 2 enormous False Gharials, into which I and 2 co-workers inserted ourselves, was both thrilling and frightening. This story is recounted in colleague Pete Brazaitis’ fine book You Belong in a Zoo. You can also read more about this incident, and those mentioned earlier, in the articles linked below. 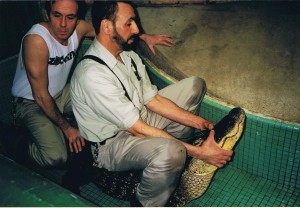 Invertebrates have generally treated me well, but I was once awakened by a frantic call from a biologist who had left some recently-collected tropical millipedes in my care. Two researchers working with these creatures had recently died, and a toxin released by the animals was the suspected cause. It turned out to be a false alarm. Interestingly, some South American monkeys do rub these millipedes into their fur. Secretions released by the agitated millipedes are believed to repel insect pests and/or kill parasites.

Scary When First Seen, but…

First impressions matter, and this is especially true where fear is concerned. Many relatively harmless creatures are fearsome in appearance, and can thus bluff their way out of trouble. And it is not only novices that can be fooled. I’ve collected and reared dragonfly larvae since childhood, and have handled the adults of dozens of species. While larger ones, some of which capture small fish, can deliver a slight nip, none have stingers. Some years ago, I caught a beauty on St. Croix. As I examined it, the bright red abdomen quickly curved forward and the tip pressed against my skin…a harmless ruse, but I instinctively dropped the insect and off it flew!

The bizarre Windscorpions or Sun Spiders, sometimes kept by arachnid enthusiasts, can administer a painful bite with their huge jaws. But their threatening appearance, and unsettling habit of scurrying after people in order to hide in the shade they provide, lends them a reputation that far exceeds their capability to do harm. The USA’s Hellbender, a huge, aquatic salamander, has much more to fear from us than vice-versa. But it is just so odd-looking, and so infrequently seen, that its appearance on the end of a fishing line always causes a stir. All of my childhood herp books carried a statement to the effect that “most fisherman cut the line once its ugly, flat head appears”… “Ah, to have such problems” I thought, longing for the chance to encounter one. I still haven’t – at least not in the wild – but I have had the great pleasure of meeting its 5-foot-long cousin, the Japanese Giant Salamander, in Japan.

Another US native, the beautiful Rainbow Snake, also generates unwarranted fear. It and the related Mud Snake bear a hard, pointed scale at the tail’s tip. When handled, they press this into the skin of the would-be-collector. No damage is done, but they are often dropped in response, and have earned the name “stinging snake” in some regions. Various centipedes employ a similar tactic, but it their case toxins may be injected, and the distraction sets one up for a very painful and potentially dangerous bite. Uploaded to Wikipedia Commons by Braboowi

Vampire, Ghost, and Thailand Fanged Frogs, Goblin Sharks, caecilians that consume their father’s living skin, parrot-eating bats, Halloween Crabs and numerous others are great creatures to investigate as the creepiest of holidays approaches. You can read more about them in this article.