Posted by: Frank Indiviglio in Fun Stuff February 14, 2015 Comments Off on How Reptiles, Amphibians and Spiders “Celebrate” Valentine’s Day 4234 Views Uploaded to Wikipedia Commons by Kaldari

As Valentine’s Day draws near, I thought it might be time to give some competition to the inevitable stories that will surface concerning monogamous mammals and “gift-giving” birds. To be sure, penguins presenting mates with rocks are cute, but how many folks know about the far-more complex (and often longer-lasting!) pair bonds formed by reptiles and amphibians, and the risky – sometimes “deceitful” – gifts borne by some amorous spiders? Recent research has turned-up frogs that mate for life, skinks that build communal dwellings, monogamous alligators, nest-defending monitor pairs and many other astonishing examples of fascinating long-term relationships among our favorite creatures.

You Call This a Gift!?

Male invertebrates of many species utilize “nuptial gifts” to convince females of their desirability as mates…or, perhaps, to avoid becoming a meal as opposed to a father! But matters become a bit complex where the aptly-named Gift Giving Spider (Paratrechalea ornata) is concerned. In one study of 53 courting males, 70% of the silk-wrapped insects they presented to females were found to be “leftovers” – hollow exoskeletons whose contents had already been consumed by the conniving suitors!

Thin male spiders usually offered worthless husks, while well-fed males presented entire insects. Follow-up lab studies revealed that females accepted both intact and empty gifts (it takes time for them to unwrap the insects and discover the con-artists!), but were more likely to mate with heavier, well-fed males, regardless of the condition of their gift. While it seems that thin male spiders bearing useless gifts may be “getting away with something” if they mate successfully, it may be that females have the last laugh. Female spiders mate with several males, and may be able to store sperm. As occurs in some other species, the female may then somehow control which male’s sperm ultimately fertilizes her eggs.

Mate Fidelity and Cooperation among Amphibians and Reptiles

It has long been suspected that certain reptiles and amphibians form long-term relationships and engage in cooperative behavior. Several recent studies have confirmed this…and some have taken herpetologists completely by surprise. Several of my favorites follow…please post your own below. Uploaded to Wikipedia Commons by Gabsch

Perhaps the most surprising has been the discovery of the world’s only completely monogamous amphibian – Peru’s Mimic Poison Frog (Ranitomiya imitator). Driven by the need for close cooperation in raising the tadpoles, pairs form lifelong bonds.

The tadpoles are deposited in tiny, nutrient-poor pools within bromeliads, and would not survive without the unfertilized eggs provided by their mothers as food. Many other Poison Frogs do the same, but Mimic males stay near tadpole pools and call to their mates when the tadpoles need to be fed (how they know when to call remains a mystery)! A closely-related frog that places its tadpoles in nutrient-rich pools is not monogamous.

Although at least twenty lizard species live in family groups, only the Great Desert Skink (Liopholis kintorei) is known to cooperatively construct complex, long-term dwellings inhabited by several generations. Researchers from Australia’s Macquarie University have discovered that these subterranean homes have up to 20 entrances and separate latrine areas, and may span 50 feet or more. Tunnel maintenance duties are carried out by family members based upon size, with the largest individuals doing most of the “heavy lifting”, but all contribute some effort.

Mated pairs of Great Desert Skinks, which are native to the red sand plains of central Australia, remain together for years. Females seem to copulate only with their mates, but 40% of the male skinks father young “outside of their primary relationship”. Uploaded to Wikipedia Commons by Paul Asman and Jill Lenoble

A 16-year-long study of Rosenberg’s Monitor (Varanus rosenbergi) on Australia’s Kangaroo Island has revealed that females are sometimes joined by males when guarding their nests. Nest-attending females attack intruding male Rosenberg’s Monitors (the main threat to eggs) whether or not their mates are present…when mates are on hand, they assist females in repelling others. Males were also observed helping their mates to cover nests on several occasions.

Uploaded to Wikipedia Commons by Coojah

The Shingle-backed Skink (Tiliqua rugosa / Trachydosaurus rugosus), much loved by lizard keepers, has the distinction of being the first documented monogamous lizard. What’s more, paired individuals live solitary lives for up to 10 months of the year, but they re-connect each breeding season. Field research has shown that pairs spend an average of 43 days together during September and October, usually in close physical proximity, at which time they mate (and, one would imagine, sort out bills, “to do” lists and such!). They then go their separate ways, having little or no contact with one another until the following September.

Uploaded to Wikipedia Commons by Catholic 85

Biologists working with American Alligators (Alligator mississippiensis) in Louisiana’s Rockefeller Wildlife Refuge were surprised to find a high degree of mate fidelity in their study population. Writing in the October, 2009 issue of Molecular Ecology, the researchers explained that 70% of the female alligators studied over a 10 year period mated with the same male each year. This is the first time such behavior has been documented in any Crocodilian, and is rendered even more interesting by the fact that the refuge supports a very dense population of alligators, and females freely move through the territories of many males. 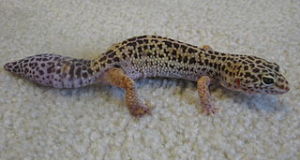 The 5 Best Reptiles and Amphibians to Choose as Holiday Gifts