Click: My Animal Collection: How a Herpetologist Keeps American Toads, Bufo (Anaxyrus) americanus and Related Species, Part I, to read the first part of this article.

American toads are, in contrast to many amphibians, quite resilient in terms of temperature tolerance.   However, they do best at moderate temperatures, and in the heat of summer will attempt to burrow below the substrate.  Mine are kept at room temperature, which ranges from 62 F in winter to 78 F in the summer.  During particularly hot spells, I move them to an air conditioned room or the cool basement.

Toads also adapt well to planted, naturalistic terrariums.  A substrate of top soil and peat moss will allow them to construct burrows, which will be used repeatedly by the same animals.  Cover the soil with one of the moss-based products listed above and dead leaves in order to retain moisture.

R-Zilla Rock Dens serve well as shelters in such terrariums, or you can create your own using cork bark or rocks.  When designing rock caves, consider that the toads may injure themselves if able to burrow and collapse the structure.  Exo-Terra Terrarium Plants are extremely life-like and can be used to good effect in naturalistic terrariums as well.

A Terrarium for Public Display

I designed the gravel-base terrarium shown in the accompanying photo for a museum in New York City.  Zoo-Med Terrarium Moss is mixed into the gravel, which itself sits on an Under-gravel Filter Plate.  A drain cut into the tank’s glass bottom allows the entire terrarium to be hosed down.  A water reserve is kept below the under-gravel plate, creating a damp but not wet environment for the resident toads and salamanders.

Feeding American Toads and Their Relatives

From spring through fall, I feed my toads exclusively upon wild-caught invertebrates.  A Zoo Med Bug Napper yields plenty of moths and beetles, and easily meets their needs.  However, I enjoy poking around, and so also collect tree crickets, sow bugs, harvestman (“daddy longlegs”), millipedes, termites, earthworms, field crickets and caterpillars whenever I am able.  I feed the toads just about every day during the summer (2-3 small insects each) and 2-3 times weekly when temperatures drop.

I avoid spiders, fireflies, ladybugs and brightly-colored insects, due to possible toxicity problems, and do not collect for a week or so after the area has been sprayed to control West Nile virus.

During the winter, I keep breeding colonies of sowbugs, earthworms and mealworms as a food source for my collection (regarding mealworms, feed toads only newly molted, or white grubs, and beetles).  The balance of the diet is made up of crickets, roaches, waxworms and butter worms.

Training your pet to tong-feed will go a long way in helping you to introduce dietary variety.  By doing so, I have been able to add Zoo Med Canned Caterpillars and Grasshoppers to my toads’ diets.

I powder feeder insects with a Tetra Repto Cal Supplement once weekly during the winter.  I’ve found that such is unnecessary in summer, when wild caught invertebrates dominate the diet.

Some Thoughts on Prey Size

I have always believed that American toads are designed, by mouth structure and feeing behavior, to take smaller-sized prey than do similarly-sized frogs (i.e. the green frog, Lithobates clamitans).  Even when feeding adult toads, I rarely use insects larger than a ½ to ¾ grown cricket.  Toads under my care are still thriving in their late 20’s and, while I cannot document such, I believe that prey size may be a contributing factor.

I’ve written other articles on toads and on amphibian care in general.  Please check out the following when you have a chance:

Making the Most of the Mealworm: some tips on enhancing the nutritional value of this pet trade staple

Pet Frogs and Toads: Five Points to Consider Before Buying 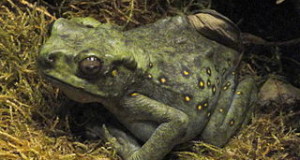 Amphibians as Pets: Care of Common and Unusual Types of Toads