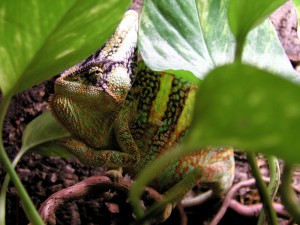 Uploaded to Wikipedia Commons by Mamboben

My grandfather cautioned me never to bet on a boxing match, as they were even less predictable than horse races.  But where chameleon fights are concerned, it seems that picking a winner is a simple matter.  A recent study revealed that color intensity and the speed with which a male can elicit color changes accurately predicted the winner of an aggressive encounter.  Furthermore, different areas of the body are used to covey specific types of information.  Chameleons know this, of course…which is why most contests end without physical contact between competing males.

Camouflage, Display, or Both?

Years ago, chameleons were thought to change color primarily to camouflage themselves from predators and prey.  In time, we learned that temperature, health, stress levels, dominance and other factors also played a role.

In recent years, researchers at Melbourne University discovered that communication, not camouflage, was the driving force behind the evolution of chameleons’ amazing abilities.  However, their work revealed that camouflage is involved as well.  At least one species, Smith’s Dwarf Chameleon, Bradypodium taeniabronchum, changes color when a predator appears…and the degree of color change varies according to the type of predator it faces!  You can read more about both studies in the articles linked below.

Uploaded to Wikipedia Commons by Geoff

Veiled Chameleons, Chamaeleo calyptratus  (which are unsociable even by chameleon standards!) were the subject of a recent study that examined color change and aggression (Biology Letters, 2013; 9 (6)).  Researchers at Arizona State University photographed and analyzed 28 distinct areas on the bodies of male chameleons involved in aggressive displays with rivals.  The brightness of the colors exhibited in certain body stripes foretold which of the chameleons would make the initial approach towards the other.  Head color intensity accurately predicted the contest’s winner.  The speed with which the various color changes took place also affected the fight’s outcome.

The vast majority of the staged aggressive encounters ended without physical combat. The rare battles that did occur lasted a mere 5-15 seconds.

Why Quit Before the Fight Begins?

I’ve read elsewhere that color change takes a heavy toll, metabolically, on a chameleon.  I imagine that a male who can quickly summon up a variety of bright, intense colors is viewed by rivals as being healthy and vigorous, and therefore not worth tackling.  Similar considerations may influence mate choice as well. Seeing as a Chameleon Sees

Chameleons and many other creatures do not perceive colors as we do.  The Arizona State University study was the first to examine the effects of color change “through the eyes” of an animal.  Using a process that I did not completely (or, truthfully, even barely!) understand, specialized cameras and information concerning chameleon visual sensitivity allowed researchers to measure colors as they are actually seen by chameleons.

From tiny Day Geckos to stout Water Dragons and lumbering Savanna Monitors, many popularly-kept lizards feed primarily upon live foods including insects and other invertebrates. The most important point for insectivorous lizard owners to remember (and one that my regular readers are sick of seeing!), is that crickets and mealworms alone, even if powdered with supplements, are not an adequate diet for any species.  Dietary variety is essential.  Fortunately, with a bit of planning, we can collect, breed or purchase a huge array of nutritious invertebrates for the lizards in our collections.

From specialists such as Horned and Caiman Lizards to Tokay Geckos and other generalists, the needs of individual species vary greatly.  Please post below for specific information on the lizards in your collection.

I firmly believe that reptile keepers should place much more emphasis on collecting insects and other invertebrates.  While caution concerning pesticides and toxic species is warranted (please see articles linked below), the risks can be managed. Some notable successes that I and colleagues have had with a variety of delicate reptiles can be credited in part to the use of wild-caught insects. END_OF_DOCUMENT_TOKEN_TO_BE_REPLACED

Chameleon Care Tips from a Herpetologist – Panther Chameleons as Pets

Chameleons are spectacular creatures to care for, but they are almost “too interesting” for their own good.  Drawn by their beauty and unique-to-bizarre characteristics, many rush into chameleon care without proper preparation.  None are suitable for beginners, but if asked to recommend a large, colorful species to an experienced keeper, I would choose the majestic Panther Chameleon, Furcifer pardalis.  While not as hardy as the Veiled Chameleon, Chamaeleo calyptratus, the Panther is adapted to environmental conditions that fluctuate wildly, and this seems assist its adjustment to captivity.  It is also an excellent study subject…recent studies have revealed new insights into the relationship between chameleon basking behavior and diet (please see below).

I’ve worked with many chameleon species in zoos, and can attest to the difficulties involved even when one has sufficient space and supplies.  Please read this article and those linked under “Further Reading” carefully, and post any questions below. END_OF_DOCUMENT_TOKEN_TO_BE_REPLACED

Pet Lizards – Fascinating Species for those who keep Reptiles as Pets

From minute House Geckos to massive Water Monitors and endangered Rhinoceros Iguanas, an amazing array of fascinating lizards is now available in the pet trade. Fortunately, many are being bred in captivity, and new discoveries concerning their needs occur regularly.  But the range of choices of pet lizards can be overwhelming. Not all species are suited for each keeper, and some, although popular, are best avoided by private collectors.

Drawing from decades of work with hundreds of species at the Bronx and Staten Island Zoos, today I’d like to highlight the pros and cons of some popular lizards. Detailed care information can be found in the linked articles, or by posting your questions below. Scores of other species could be used in place of those I have suggested…please be sure to write in with your own favorites, so that other readers may benefit from your experiences.

This stocky desert-dweller was once difficult to maintain in captivity, mainly because its UVB requirements were ignored. Today’s high-output florescent UVB and mercury vapor bulbs have changed this situation, and captive bred animals are now readily available. END_OF_DOCUMENT_TOKEN_TO_BE_REPLACED Hello, Frank Indiviglio here. Perhaps the most fantastically-bizarre of all lizards, chameleons have long been popular in private and public collections. However, the world’s 195 species, ranging in size from the 1.5 inch-long Pygmy Leaf Chameleons (Rhampholeon spp.) to the 30 inch Oustalet’s Chameleon (Furcifer oustaleti), often prove to be difficult captives.  Although great strides have been made, chameleon husbandry remains challenging, if intriguing. The following points, drawn from notes taken during my years working at the Bronx Zoo, are useful to consider before embarking on a chameleon-keeping venture.

Wolverines and Tasmanian Devils are more sociable than the average chameleon!  Highly territorial, both males and females will fight among themselves and with the opposite sex. Pairs may get along in large, heavily-planted enclosures, but they must be watched closely.

Chameleons abhor handling, and are best considered as animals to observe only.  Don’t worry, for when properly kept, chameleons will reward you by exhibiting fascinating behaviors…but this will not be the case if you disturb them with unnecessary handling! END_OF_DOCUMENT_TOKEN_TO_BE_REPLACED