Working with Spitting Cobras has been a fascinating, if sometimes un-nerving, experience. In addition to being able to deliver venom via biting or ejection through the air, Spitting Cobras also have the alertness and speed that is typical of nearly all the world’s 353 Elapid species. On two occasions, I’ve had to re-capture a total of 6 escaped Red Spitting Cobras (Naja pallida) – once because a man helped his little son to kick in the glass of an exhibit at the Bronx Zoo! (please see article linked below) But despite these incidents, and decades of working closely with related species, the only venom to wind up in my eyes came not from a Spitter, but rather courtesy of a species that “cannot spit” – the Western Diamondback Rattlesnake (Crotalus atrox).

Most of the obvious risks associated with venomous snake care are easy to avoid (in a reputable zoo, that is…one cannot properly prepare for a bite delivered by a snake in a private collection). When working with Spitting Cobras, for example, safety glasses are always worn. Emergencies occur, of course, and then you must sometimes make do without. In the escape mentioned earlier, for example, I arrived on the scene not knowing that Red Spitting Cobras were involved, and I had to immediately evacuate visitors, many of whom were children, from the area. But, as in most fields, the greatest dangers arise from unexpected situations – those that we don’t imagine or believe can happen. This was the case one day when I was in a Bronx Zoo holding area, checking on some newly-arrived Western Diamondback Rattlesnakes. The snakes had been confiscated the night before, in a store in NYC, of all places. Several police officers had entered following a report of a burglary, and found snakes instead of criminals. The snakes, mainly Western Diamondbacks, were being held in a variety of slip-shod containers; several dead individuals were in cooking pots, alcoholic drinks, and “medicines”. As usual, the Bronx Zoo was summoned.

Co-workers and I had installed the snakes in screen-topped aquariums in an isolation room at the zoo’s Reptile House. As is dictated by protocol (and common sense!), I was careful not to lean on any screen tops as I checked the animals. All were highly agitated. Unable to see one individual clearly through the tank’s glass side, I peered down into the screen top. The snake struck at the top, and I instantly felt a splash of liquid in both eyes. Uploaded to Wikipedia Commons by Department of Sustainability & Environment

The standard wisdom is that only Spitting Cobra venom can cause eye damage. In the rare event that another type of venom enters the eye, it needs merely to be washed out; a follow-up with a doctor, to assure that an infection does not take hold, should follow. But this incident was unique for two reasons. First, the force of the snake’s strike against the screening had propelled the venom into my eyes. Second, I had just returned to work following a cornea transplant. There were numerous stitches in my eye, and they were not all that stable.

I felt a stinging sensation (which is not typical for other than Spitting Cobra venom) and thought that perhaps the venom had seeped under my cornea through the stitches. I wondered if the transplant could be ruined, and if I might suffer a typical envenomation as well, once the venom moved further along in my body.

Just When You Thought You Had Seen Everything…

The Bronx Zoo’s snakebite protocol relies upon the NYC Police Department for transport to the hospital. Fortunately, several NYPD Officers are always on the grounds. I was on friendly terms with all – one, in fact, was a former BZ animal keeper, and all were top-notch. It’s hard to surprise an officer who’s spent some time in the Bronx, but I did a good job that day! In less time than I could imagine, I was at Jacobi Hospital being attended to by a young doctor who, after some time in a busy Bronx emergency room, thought he had seen it all!

All went smoothly, and I suffered no symptoms of envenomation. It would have been interesting to learn if the venom had entered my body via a cornea stitch, but in those years Bronx hospitals were unbelievably busy (often with unbelievable, at least to me, cases) and there was no time for speculation or experimentation – I was shuttled out as quickly as I’d arrived!

A Close Call with a King Cobra

2014-11-18
Frank Indiviglio
Previous: Thanksgiving at the Zoo: The Giant Appetites of Snakes, Frogs, and Moles
Next: Sailfin Dragon Care and Conservation: a Zookeeper’s Notes 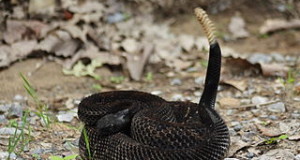 Venomous Snake Identification: the Best Online Guide for US Species