Posted by: Frank Indiviglio in Crocodilians, Reptiles and Amphibians in the News March 22, 2014 2 Comments 17428 Views Yet another Floridian reptile drama has made headlines.  Earlier this month (March, 2014) officials from the Florida Fish and Wildlife Commission (FFW) reported that a Nile Crocodile (Crocodylus niloticus) had been captured in the northwestern Everglades.  Although the origin of this particular animal may be known, it is not the first Nile Crocodile to have been captured in the state, which is now home to an astonishing 500+ species of non-native animals (and a great many plants)!  And while Nile Crocodiles are a rarity in Florida, the possibility of hybridization with the native American Crocodile (C. acutus) may be a concern.  In the course of my work in zoos and via contacts with commercial croc farming projects, I’ve seen many examples of hybrid crocodiles.  I cared for a Cuban Crocodile x American Crocodile cross, and Siamese Crocodiles are regularly interbred with others on farms.  Hybrid crocs were even openly offered for sale as “pets” back in the “Wild West” days of the pet trade (and perhaps still are?).

The recently-captured Nile Crocodile measured 5 ½ feet in length and weighed 37 pounds – too small to have reached sexual maturity (another, also an escaped exhibit animal, measured 9 feet in length when re-captured). It is believed to be the same individual that has been sighted several times over past 2 years.  FFW officials are looking into the possibility that this animal escaped from a Miami facility just before the sightings began.  If genetic evidence confirms Uploaded to Wikipedia Commons by Mattstone911

this, the owners could be subject to a fine and/or imprisonment under Florida law.

Crocodiles and the Leather Trade

There has been speculation that live crocodiles imported to the USA for use in the skin trade may be another source of escapees.  However, all operations that utilize Nile Crocodiles are, according to the IUCN’s latest report, located in Africa (please see article linked below).

Nile Crocodiles are second only to American Alligators in terms of the number of skins sold each year.  The IUCN reports that between 2006 -2008, 1.5 million crocodile, alligator and caiman skins were legally traded.  Thirty countries and 13 crocodilian species were involved.  The global economic downturn has suppressed demand since that time.

Florida has the dubious honor of hosting more non-native invertebrates, fishes, reptiles, amphibians, birds and mammals than anywhere else on earth.  An astonishing 500+ exotic species have been observed, and many if not most have established breeding populations.  Last year, the federal and Florida state governments spent 80 million dollars in eradication attempts.  Threats to agriculture and habitats posed by introduced plants are also significant.

Other costs are involved as well – over the past decade, for example, 100 million dollars has been spent on re-establishing the endangered Wood Stork.  Nile Crocodiles and Burmese and African Rock Pythons are capable of preying upon Wood Storks, and other species could impact these endangered birds in ways that have not yet been identified. Many of Florida’s introduced reptiles are very well-known, even to those without much interest in animals.  In some areas, Green Iguana populations are denser than in natural habitats…denser, in fact, than populations of any other lizard, anywhere on earth (please see article below for an interesting study on iguana-raccoon interactions)!  Brown Anoles seem to have replaced the native Green Anole in many areas, and 6-8 other anole species are established as well.  And, of course, one cannot escape news of introduced Burmese and African Rock Pythons and Boa Constrictors.

Less well-known is the fact that Spectacled Caimans (Caiman crocodylus) have been breeding in Florida since the 1960’s, which was their heyday in the pet trade.  Other surprising transplants include Javan File Snakes (Acrochordus javanicus), Texas Horned Lizards (Phrynosoma cornutum), Mexican and Black Spinytail Iguanas (Ctenosaura pectinata and similis) and Indochinese Tree Agamas (Calotes mystaceus).  There are many others…please post below if you wish a complete list.

I’m surprised that, with the exception of Armadillos and Nutrias, Florida’s introduced mammals do not seem to generate much interest.  The list really is quite amazing, and includes such large and unusual creatures as Asian Sambar Deer, American Elk, Jamaican Fruit Bats, Capybara, Mexican Red-Bellied Squirrels and Rhesus, Squirrel and Vervet Monkeys.  Please post below for more info, and see the linked article on Florida’s many feral parrots. Uploaded to Wikipedia Commons by N. A. Naseer

Extermination efforts have rarely been successful, regardless of the species involved.  In fact, the FFW has given indications that the Burmese Python campaign may shift from “eliminate” to “control” mode.  I’ll post updates as they become available.

Raccoons and Iguanas in Florida – an Interesting Dilemma

2014-03-22
Frank Indiviglio
Previous: My Leopard Gecko Is Not Eating: What To Do
Next: Anole Lizard Care, Facts & Behavior 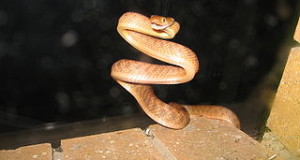