Madagascar’s bizarre Leaf-Tailed Geckos (Uroplatus spp.) are on the wish lists of many lizard enthusiasts.  Even after decades of keeping reptiles in zoos, I was shocked by the sight of my first specimen.  Equally unique are Australia’s fantastic Leaf-Tailed Geckos (genus Saltuarius).  In color, shape (some look like insect-chewed leaves!), movement and body position, both groups take camouflage to its extreme.  The recent (October, 2013) discovery of a new Australian species, the Cape Melville Leaf Tailed Gecko, has caused quite a stir.  Its Latin name means “exceptional, extraordinary and exquisite”…and it is very fitting! I know that I’m not alone in being thrilled that there are still such unusual creatures waiting to be found.

Uploaded to Wikipedia Commons by Adam.J.W.C.

Only 6 individuals have been found, all on granite boulders beneath a rainforest canopy (please see habitat photo). This same mountain range is also home to 3 endemic (found nowhere else) frogs and 2 endemic skinks.

The newly-described species averages 4.8 inches in length and is clad in a boggling array of intermingling hues of dark and light gray and brown over cream and white patches. It differs in appearance from related geckos in several ways, including having longer limbs, a slimmer body, smaller head and larger eyes.  It is believed that these characteristics suit the lizard to life among the boulder heaps that seem to be its only habitat.

Uploaded to Wikipedia Commons by Hexasoft

Photos of the Cape Melville Leaf-Tailed Gecko are posted here.  A photo of a related species, the Southern Leaf Tailed Gecko, is included with this article.

The 6 specimens were found on boulders in a head-down position with the body raised up from the surface of the rocks.  It is believed that they are sit-and-wait predators and were in hunting mode when discovered.

Australia’s Leaf Tailed Geckos are not closely related to those on Madagascar, and are placed in different families (Carphodactylidae and Gekkonidae, respectively). Yet one would be hard-pressed to tell them apart.

They have evolved similar appearances and lifestyles, despite living on different continents (please see photos).  A better known example of this phenomenon, known as convergent evolution, is the similarities between the Emerald Tree Boa and Green Tree Python.  What makes the Leaf Tailed Gecko situation so unique is that both groups have evolved such out-of-this world appearances and unusual lifestyles. To my knowledge, only American Horned Lizards and Australia’s Thorny Devil are in the same league, in terms of unusual adaptations.

You’ll not likely be seeing Australian Leaf Tailed Geckos in the pet trade or US zoos anytime soon, but several stunningly-bizarre Madagascan species are now being bred in captivity.  Please see this article to learn how to keep the Spear Point Leaf Tailed or Nosy be Gecko, and post any questions or comments below.  And if you’re really into spectacular geckos, please check out the huge New Caledonian Giant Gecko, known locally as the “Devil in the Forest”!

An Introduction to the Geckos

Previous: How to Breed Dwarf African Clawed Frogs
Next: Small Boa Constrictors as Pets – Island Races of the Common Boa 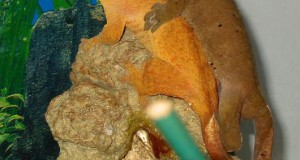