Posted by: Frank Indiviglio in General Reptile & Amphibian Articles, Reptiles and Amphibians in the News, Venomous Snakes May 3, 2010 2 Comments 5975 Views

As reptile enthusiasts know, snakes are difficult to find.  But dogs are very good at it, and as a consequence are bitten by venomous species more often than are their owners.  Spring is prime hiking time, and also when snakes are most likely to be encountered while basking, seeking mates, or searching for meals after the long winter’s fast.  The recent experience of one of our readers, whose Arizona property was frequented by Mojave Rattlesnakes, spurred me to look into the question of snake-dog interactions.

The gentleman in question lost a favorite dog to a Mojave Rattlesnake bite.  He enrolled his 2 remaining dogs in a program offered by Partners Dog Training, a company which pioneered the concept of snake avoidance training for dogs.  In many cases, dogs that have been trained to avoid snakes (recognition is based on sight, sound and smell) also warn their owners of the presence of one – useful, as we usually miss them if not guided by a dog!  One of our reader’s dogs responded well, the other was less-enthusiastic but will take additional training soon.

North America is home to 36 Rattlesnake species; the other venomous snakes native here include Coral Snakes, Copperheads and Water Moccasins.

Rattlesnakes, while not always the most common species in any particular region, account for a disproportionately large number of bites.  A number of factors may explain this – large size, tendency to bask and hunt along trails that people use, adaptability to human presence and a frequent reluctance to retreat.

Rattlesnakes reach their greatest diversity in the American Southwest – 13 species occur in Arizona alone!  The large, feisty Western Diamondback and the Prairie Rattlesnake, both highly adaptable and with huge ranges, are those most involved in dog incidents. 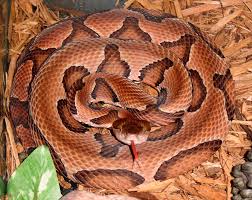 Copperheads are rather shy; most bites occur when they are harassed.  “Harassment” (or foolishness!) took on new meaning for me when I was summoned to respond to a bite years ago.  The victim was a young man who had collected (illegally) a Northern Copperhead and decided to determine its sex while he was driving, with his dog bouncing around the car at the same time! 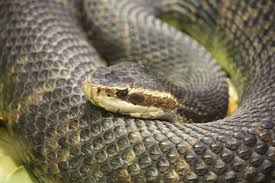 Water Moccasins can be aggressive when threatened but often retreat into water if able.  One must usually search quite hard for Coral Snakes, which spend most of their time underground or beneath cover.

Snakes sense danger, via ground vibrations or scent, from far off; most take shelter rather than risk a standoff.  However, on cool mornings and evenings, especially in the spring and fall, many species warm up by basking on roadways and other heat-retaining surfaces.  In these situations, they may be slow to retreat, as the speed at which a reptile can respond is tied to its body temperature.  Dogs can corner them easily at such times – and the snake may then have no choice but to make a stand where it lies.