Prehistoric cave paintings show that the pitfall trap, a simple covered or uncovered hole designed to capture animals, came into being very early in our evolution as a species.  Indeed, they are still used by hunters and field researchers today.  Pitfall traps also provide pet keepers with a simple, effective means of collecting live food for reptiles, amphibians, tarantulas, scorpions, mantids and other terrarium animals.

Building and Baiting the Trap

To create a pitfall trap, simple bury a can or jar flush with the ground and cover it with a board that is slightly elevated by small stones.  This will keep rain out while allowing invertebrates to enter.

An amazing assortment of creatures will simply stumble into such a trap, but you can increase its effectiveness by adding bait. A bit of ripe fruit, molasses, honey and some tropical fish flakes will lure all sorts of insects, sow bugs and other invertebrates (snails and slugs are especially fond of beer).  Be sure to keep some dead leaves or paper towels in the trap as well, to provide places for your catch to hide and keep away from one another.

Boards or other cover spread about an area, which can be easily turned and checked, will also attract a variety of insects. Spraying the area with a hose during dry weather will attract increased numbers of invertebrates to these shelters.

Always use caution when examining your catch, as potentially dangerous spiders, scorpions, hornets and other such creatures may be present.  Have a good field guide on hand if you are unfamiliar with local species, and use feeding tongs to remove animals from the trap.

Native Beetles in the Terrarium

If your interests extend to native invertebrates, your trap will likely provide you with some pleasant surprises.

One of my favorite and rather frequent catches is the caterpillar hunter (Calosoma scrutator), a widespread beetle that feeds upon caterpillars and other soft-bodied insects (a relative, the forest caterpillar hunter, was imported to the USA from Europe in 1905 to battle gypsy moths).  Next time I’ll write a bit more about the natural history and captive care of these colorful, interesting, but largely over-looked beetles.

I have long relied heavily upon wild-caught invertebrates as food for animals in both zoo and my own collections.  In the past I have written about collecting leaf litter and arboreal insects, as well as devices such as termite traps and the Zoo Med Bug Napper.  Please see the following articles for more information:

Image referenced from Wikipedia and orignally posted by 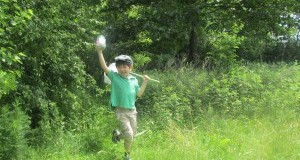