The Indian Sand Boa (Eryx johnii johnii) is a “boa” in name only…in lifestyle and appearance it is in a class all its own. Being the largest and most docile of the world’s 12 sand boas, this fascinating snake is much sought after by reptile enthusiasts. Although no harder to maintain than the Kenyan Sand Boa and its other popularly-kept relatives, Indian Sand Boas are not commonly seen in the US pet trade, and rarely exhibited in zoos. Despite having spent a lifetime involved in reptile care in zoos and museums, I’ve only run across this attractive, interesting snake sporadically – hopefully more private keepers will begin working with it soon. Please let me know of any interest or experience you have had by posting below…you may also see this snake sold under the names “Red Sand Boa” and “Two-Headed Sand Boa”. Uploaded to Wikipedia Commons by AshLin

To sand boa enthusiasts accustomed to the modestly-sized species typically seen in the pet trade, the Indian Sand Boa will seem impressively large and stout. The cylindrically-shaped adults average two feet in length, although some may reach nearly twice that size.

The small scales appear “polished”, and are colored reddish-brown or yellow-tinged tan. Certain individuals exhibit very beautiful hues of these colors, but all are attractive. The blunt tail closely resembles the head… when threatened, the Indian Sand Boa tucks its head into a protective ball of coils and presents the tail to its attacker. As an adaptation to life spent below ground, the wedge shaped head serves as a “spade”.

The Indian Sand Boa’s range has not been well-studied, but it is known to occur in western and southern India, Pakistan, Afghanistan and, possibly, Nepal. A subspecies, the Persiche Sand Boa (E. j. persicus), is limited in range to Iran. Eleven related sand boa species are found in Africa, south Asia and the Middle East.

A single adult may be housed in a 20 to 30 gallon aquarium. Indian Sand Boas must be provided course sand and smooth gravel in which to burrow. These secretive snakes rarely thrive if forced to shelter in caves – rather, body contact with the substrate is essential. However, some will remain beneath a piece of glass laid atop and partially covered by sand, and so may be easily observed. 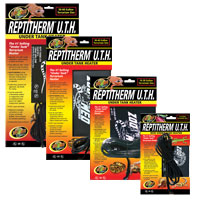 Indian Sand Boas do well at an ambient temperature range of 78-85 F, and with a basking temperature of 90-95 F. As they rarely bask on the surface, a sub-tank heat pad should also be employed along with an incandescent bulb.

In common with other snakes hailing from arid habitats, the Indian Sand Boa produces dry, compact waste products. If droppings are removed regularly, there is usually little need to break down and clean the entire terrarium. Uploaded to Wikipedia Commons by Viki

As with the more commonly-kept Kenyan Sand Boa (please see photo), Indian Sand Boas must be kept dry, because skin and respiratory disorders develop rapidly in damp surroundings. Always use heavy water bowls that cannot be tipped over when the animal burrows. As other snakes are included in their diet, Indian Sand Boas are best housed alone, and should be watched carefully when paired for breeding.

Indian Sand Boas are highly-specialized ambush predators that wait below the sand for gerbils and other rodents, lizards and smaller snakes. To assist in this hunting strategy, the eyes and nostrils are placed high on the head, which is left partially exposed when they are hunting. Captives will literally explode from the sand to snatch mice moved about with a feeding tong…very impressive, and always a shock to the uninitiated! The jaws of the Indian Sand Boa are not well-suited to swallowing large meals. Except for extra-large individuals, young mice are preferable to adults as a food source. Youngsters should be fed once weekly, while adults do fine with a meal each 10-14 days.

A short period of increased humidity may encourage breeding, but seems not essential.

The young are born alive after a gestation period of approximately 4 months. Due to their large size (nearly 1/3 that of the mother) and unique coloration (orange with black rings) newborn Indian Sand Boas command high prices.

Unlike the young of other sand boas, they are large enough to take pinkies, and rarely “demand” lizards as food.

While most other sand boa species become stressed when removed from their subterranean hideaways, Indian Sand Boas often take short periods of gentle handling in stride. However, the smooth, glossy scales may render them difficult to control.

All sand boas have an ingrained feeding response that often causes them to strike if touched while buried, so take care when approaching your pet or working in the terrarium.

2015-04-14
Frank Indiviglio
Previous: Your First Pet Lizard: a Checklist of Things to Consider
Next: Amphiuma Care: Keeping one of the World’s Largest Amphibians 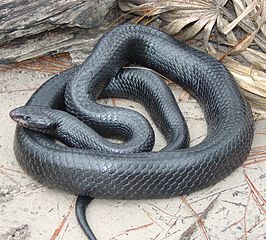