Posted by: Frank Indiviglio in Snakes March 6, 2015 Comments Off on The USA’s Only Native Rear-Fanged Vine Snake: Care and Natural History 10654 Views Uploaded to Wikipedia Commons by berichard

Although I’ve cared for Latin American and Asian vine snakes in zoos, and have searched their natural habitats, I had somehow missed the fact that one occurs in my own country, the USA. In extreme south-central Arizona may be found a “tropical-looking” snake seems somewhat out-of-place (to me, at least!) – the Mexican or Brown Vine Snake (Oxybelis aeneus). Being rear-fanged, high strung and quite demanding as to its diet, the Mexican Vine Snake is not recommended for other than well-experienced keepers. However, in both behavior and appearance it is most fascinating, and well-worth more interest and study. As mentioned, the Mexican Vine Snake is unique among similar species in that its range extends into the USA…but just barely. The US population is limited to the Atascosa, Patagonia and Pajarito Mountains in the south-central tip of Arizona. The remainder of its range is huge, extending from Mexico to Brazil, Peru, and Bolivia, and including the islands of Margarita, Trinidad and Tobago.

The Mexican Vine Snake inhabits relatively arid environments, including dry forest edges, overgrown thickets, wooded grasslands, brushy hillsides and densely-vegetated canyons. In common with the other 3 species in the genus, it is entirely arboreal.

Mexican Vine Snakes are very thin and “vine-like” in profile (no surprises there!). Although somberly-colored, their various shades of gray, silver and copper blend together in an attractive manner. A dark line extends from the snout through the eye and down the neck. The chin and area below the eyes are usually bright yellow in color. Typical adults measure 4 1/2 – 5 feet in length.

The Mexican Vine Snake is a rear-fanged species that uses venom to kill its prey (please see below).

Mexican Vine Snakes are best housed in large, vertically-oriented terrariums or custom-built cages. Zoo Med’s Repti-Breeze cage would be a good choice for a moderately-sized individual, but a large adult would require more room.

Climbing space is essential. The enclosure should be provided with numerous branches and tangles of real or artificial vines. Ideally, their living quarters should also be stocked with live plants, which will provide a sense of security and hiding spots. Hanging potted pothos has worked well for me. Most individuals prefer sheltering among plants and vines to hollow cork bark or other arboreal caves. If live plants are not used, hanging artificial plants and dry Spanish moss may be substituted. Mexican Vine Snakes will not thrive in small enclosures, or if denied above-ground cover. 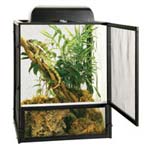 Like many arboreal snakes, Mexican Vine Snakes will drink water sprayed onto the body; some will also accept water from a bowl. As they do not take well to disturbances, cypress mulch or similar materials that allow for spot-cleaning are preferable to newspapers as a substrate. The cage should be located in a quiet area of the home. An ambient temperature range of 75- 80 F is ideal, with a basking site set at 88 F.

Some keepers believe that low levels of UVB light and UVA exposure are beneficial to this and related species. The natural diet is comprised of lizards, treefrogs and small birds; small arboreal rodents and insects may also be taken, but detailed field studies are lacking. Brown Anoles, Mediterranean Geckos and several other small lizards that have been introduced to Florida are the most reliably-available captive foods (in my experience, anoles were favored over others). Chicks and pink or fuzzy mice are taken by some individuals. The use of large food items has been linked to intestinal blockages, and I’m not certain that a rodent-only diet would be ideal long-term.

Youngsters feed primarily upon frogs and lizards, and usually refuse all else. Scenting a pink mouse leg with a frog or anole may induce feeding.

Waste must be removed in a manner that does not disturb the snake or expose one to a bite. The cage should be misted lightly each day, but dry conditions should prevail. As individuals offered for sale will likely be wild-caught, a veterinary exam is recommended for all new additions to your collection.

Captive breeding has rarely been accomplished, and is not well-documented in the literature. Research into this area by private keepers would be most valuable to this snake and its relatives. Field observations indicate that 4-8 eggs are typically produced. Mexican Vine Snakes are notoriously high-strung, and should be viewed as creatures to observe rather than handle. When approached, they open the mouth to expose its black interior and strike repeatedly (please see photo of Asian Green Vine Snake threat display).

Although the venom produced is not considered dangerous to people, the possibility of an allergic reaction, and the consequences of a bite to a child, elderly person, or immune-compromised individual, must be considered. Your doctor should be consulted before a rear-fanged snake of any species is acquired.

Asian snakes of the genus Ahaetulla also go by the common name of “vine snake”. Although they closely resemble the New World species in form and habits, they do not appear to be closely related. Several are available in the trade from time to time. I’ve kept the strikingly-beautiful Green or Long-Nose Asian Vine Snake (Ahaetulla nasuta; please see photos) at the Bronx Zoo – the experience was well-worth the time and energy invested in its care! Please post below for further information.

The Cloudy Snail-Eating Snake, Blunt-Headed Treesnake (please see photo) and 1-2 others of the genus Imantodes sometimes appear in the pet trade under various “vine snake” names as well.