My Experiences with Snake Necked Turtles in Zoos and at Home

Posted by: Frank Indiviglio in Turtles & Tortoises October 21, 2014 Comments Off on My Experiences with Snake Necked Turtles in Zoos and at Home 6762 Views

Among the Snake Necked Turtles of the family Chelidae we find some of the world’s most unique and effective reptilian predators. I’ve had the good fortune of knowing many, including a few that were newly-described; all have been fascinating to keep. From the massive Giant Snake Neck (Chelodina expansa), which snatches fish with blinding speed, to the bizarre Mata Mata (Chelus fimbriatus), which sucks them down like a vacuum cleaner, all have their surprises and secrets. While many are suited only for experienced keepers with room to spare, others are quite hardy and suitable for most serious turtle enthusiasts.

The world’s 56 Snake Necked Turtles are classified in the family Chelidae. Their trademark necks, which are snake-like in both length and striking speed, render the family unique among all the world’s turtles. 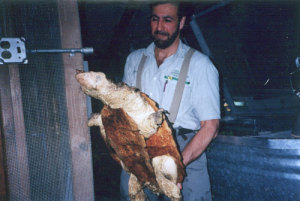 Snake Necked Turtles range from 6 to over 20 inches in length. Those with the most impressively-long necks are found in the genus Chelodina. Most of those native to Australia, New Guinea and Indonesia are strong swimmers with streamlined carapaces and fully-webbed feet. Others, such as the New Guinea Snapping Turtle (Elseya novaeguineae) have shorter (but still long!) necks and somewhat domed shells. All withdraw the neck into the shell on a sideways angle rather than straight back, as is typical for “regular” turtles.

The South American members of the family vary greatly in appearance, and do not have the outlandishly-long necks typical of their Australasian cousins. One of these, the Mata Mata (Chelus fimbriatus), is perhaps the world’s most unusual turtle. The broad flattened head of this aquatic creature, adorned with skin tubercles and flaps, and bearing a long, pointed snout, does not appear to belong to a turtle…or to any animal for that matter! The skin flaps may attract fish, which are sucked into the huge mouth when the throat distends, creating a vacuum-like action. Those I’ve kept (please see photo) have also accepted tadpoles, shrimp and other aquatic invertebrates. Ranging from Venezuela and Surinam to Columbia, eastern Peru and northern Brazil, this black water river denizen commands high prices in the pet trade, and is best reserved for well-experienced keepers.

Snake Necked Turtles are found in Australia, New Guinea, Indonesia and South America. With the exception of the equally-unusual Fly River Turtle, they are the only freshwater turtles native to Australia and New Guinea.

Most Australasian species spend the majority of their lives in water, emerging only to bask or deposit eggs. South American representatives vary in their habits – the Mata Mata Turtle is completely aquatic but others, such as the Twist Necked Turtle (Platemys platycephala), spend some time on land.

Depending upon the species, fast-moving rivers, swamps, lakes, flooded grasslands, tidal streams and other aquatic habitats are occupied. Uploaded to Wikipedia Commons by http://www.birdphotos.com

Snake Necked Turtles are highly carnivorous, although some add fallen fruit and aquatic plants to the diet. Those with very elongated necks, such as the Giant Snake Necked Turtle (Chelodina expansa), strike at swimming fish with lightning speed, and rarely miss. In my experience, only the Common Snapping Turtle and some of the Softshells (most notably the huge Narrow-Headed Softshell, Chitra indica), can equal their amazing striking speed; none snare fish so efficiently.

Fish are favored by most, but tadpoles, crayfish, snails, carrion, worms, and insects are also taken; larger species occasionally add small lizards, frogs, snakes, and mammals to the diet.

Pet Snake Necks fare best on a diet comprised largely of whole organisms such as earthworms, occasional pre-killed pink mice, crayfish and fresh water minnows and shiners. A steady diet of goldfish has been linked to several health concerns among Mata Mata Turtles, so in zoos we avoid or strictly limit their use in general.   Super mealworms, roaches, crickets and other insects can be used to vary the diet. Many refuse dry turtle foods, at least initially, but the products sold by Zoo Med and other well-respected companies are worth experimentation.

The calcium requirements of all species are likely quite high, with whole freshwater fishes being the most important source of this mineral. Some have done well without UVB exposure, but most successful private and professional keepers provide access to a UVB bulb.

Temperatures should range from 72-80 F, with a basking site of 85-95 F, but the requirements of each species vary somewhat. Please post below for detailed information on the individual turtles in which you are interested.

Reptile Aquariums and the Nitrogen Cycle