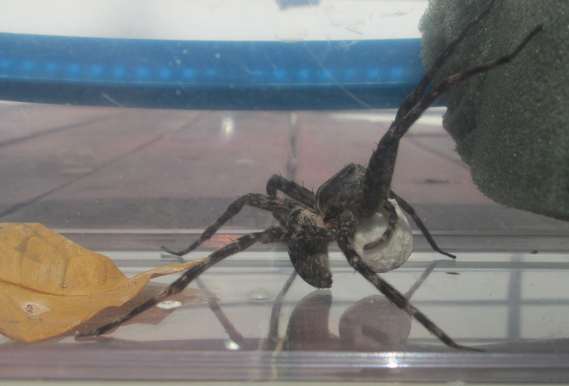 The largest true (“non-tarantula”) spiders that most folks in the USA will ever encounter, Fishing Spiders are at once fascinating and a bit intimidating. This is especially so for egg-guarding females, who may prefer to fight rather than flee when disturbed. I recently came across one such female below a dock, while accompanied by my 5 ½ year old nephew. Thanks to my long career as a zookeeper, the little guy has been up close to a huge array of animals since infancy, and especially favors spiders. After locating the spider, we swam out from beneath the dock to plan our capture strategy. Noting my sidekick’s smaller size, and the fact that he has handled snakes longer than himself, I suggested that he go back and collect it, as the area was cramped. “No way, man” was all he said!

But ferocious appearances aside, Fishing Spiders make great terrarium inhabitants. Due to their size and boldness, they are very easy to observe as they catch fish, walk on water and care for their eggs and young. I’ve never understood why more spider enthusiasts have not taken an interest in them… perhaps this article will change some minds! Uploaded to Wikipedia Commons by Howcheng

Tarantulas are not the only Vertebrate-Eating Spiders

Most folks know that large tarantulas sometimes catch small lizards and other vertebrates, but among the true spiders this strategy is relatively unstudied. A recent survey of the subject, published in the June 18, 2014 issue of Plos One (please see link to article, below) revealed that at least 18 species in 8 families feed upon fish. Despite being small and slightly built by tarantula standards, Fishing Spiders, aided by vertebrate-specific neurotoxic venom, can take prey that exceeds their own weight 5-fold.

North America is particularly rich in Fishing Spiders, most of which are classified in the family Pisauridae. Eleven family members are documented fish-catchers, and others may do so as well. Also known as Nursery Web Spiders, some live far from water and eat insects, while others move between aquatic and terrestrial habitats.

My favorite is the Dark Fishing Spider, Dolomedes tenebrosus, which ranges from southern Canada west to North Dakota and south to Florida and Texas.Females measure over 1 inch in body-length, and their legs span 3+ inches. The grayish-brown body is marked with black, and the legs are banded, but individuals vary.

Uploaded to Wikipedia Commons by Brummfuss

Maternal Care of Eggs and Young

Female Dark Fishing Spiders carry their egg cases, which may contain up to 1,400 eggs, suspended between the chelicerae (fangs), pedipalps, and spinnerets (large wolf spiders, which resemble fishing spiders, carry their eggs at the rear of the body, attached to the spinnerets).

Egg-guarding females that I collect in July often produce a second fertile egg case in September. Those I’ve kept near an east-facing window regularly basked in the morning sun with their egg cases, and then took shelter as temperatures rose.

At the end of the incubation period, the female constructs a web in which she suspends the egg mass…hence the alternate name, Nursery Web Spider. She stays with the hatchlings for awhile, defending them against predators. My females refused food at this time, but would rush out and “push” crickets that ventured near the web, and would strike at forceps placed in their vicinity.

Dark Fishing Spider eggs hatch from July to September. Outdoors, the young hibernate during the winter and become sexually-mature by the following May-June.

Fishing Spiders employ varied hunting techniques. Mine leap at moths, chase down crickets with blinding speed and, most amazing of all, snare guppies and minnows from beneath the water’s surface. In large, planted terrariums, most split their time between lying in ambush on bark slabs and “fishing” at the water’s edge.

Anecdotal reports suggest that some Fishing Spiders lure fish to the water’s surface by wiggling a leg in imitation of an insect. I don’t believe this has been definitely documented (please write in if you know otherwise), but the theory is a fascinating one. When hunting at the water’s edge, they anchor the rear 6 legs to a dock, plant or rock and keep the front legs on the water’s surface. Fish, tadpoles or insects that disturb the surface are instantly attacked, with the spiders moving out over the water for several inches if necessary. Flying insects that fall onto the water likely comprise the bulk of their diet in most habitats.

Along the Delaware River, I’ve also observed Fishing Spiders standing on the water’s surface, 1-2 feet from the shore, after dark. They are unaffected by a weak flashlight beam, and, much like over-sized water striders, quickly “skate” over to grab insects that I toss in their vicinity. They can also dive and swim below the surface, but I’ve yet to observe this personally.

Caution: Although Fishing Spiders are not considered to be dangerously venomous, they are fast and will not hesitate to bite.  We know little about spider venom, and the possibility of an allergic reaction must be considered….please do not touch any spider with bare hands. Be sure to check your spider’s location before opening the terrarium, as they are incredibly fast.

Dark Fishing Spiders do fine in simple terrariums, but show themselves to their best advantage if provided plenty of space, live plants, upright cork bark slabs and a small pool of water. I use large battery jars or 5-10 gallon aquariums which have a water area created by attaching a panel of glass to the aquarium’s sides with silicone. Complex terrariums allow the spiders to show off their impressive hunting skills, which are most evident when they leaping at moths or flies and snaring fishes.

Fishing Spiders are quite voracious. Captive females have even been observed feeding upon dead fish, and a photo in the article linked below shows one grabbing a bait minnow from a miscast fishing line (I once accidentally hooked a hawk in Venezuela, but this is the only “fishing for a fishing spider” incident I know of!).

Along with guppies and minnows, I offer wild-caught moths, grubs, tree crickets, caterpillars and such when possible, saving crickets and waxworms for the cooler months (wild adults expire in September-October, but captives can live well into January). Hatchlings will take fruit flies, springtails and “meadow plankton”. Small frogs, tadpoles, dragonfly larvae and even slugs have been documented as part of their diet in the wild.

I keep my Dark Fishing Spider terrariums very moist, but others have done well in dry set-ups with a daily misting. Hatchlings desiccate easily, and so should be kept in humid enclosures. Normal room temperatures suit them well. I’ve also kept several related species that frequent upland habitats…all have proven to be interesting, hardy captives.

While they are not at all shy about feeding by day, Fishing Spiders really come into their own at night. A red reptile night bulb will be a great asset if you wish to observe them after dark.

Other Spiders in the Terrarium

Fishing Spider fans will also enjoy the Huntsman or Giant Crab Spider (Heteropoda venatoria), a large, aggressive Asian species that has become established in Florida (of course!) and elsewhere. Jumping, Crevice, Wolf, Crab and Orb-Weaving Spiders, along with countless (literally!) others, also make fascinating terrarium subjects. Please see the articles linked below for information on keeping other spiders, and be sure to post your own thoughts and experiences.

Beyond Webs: Swimming, Spitting and other Spider Hunting Strategies

2014-07-08
Frank Indiviglio
Previous: Chameleons as Pets: Breeding Senegal Chameleons
Next: Thawing Frozen Mice and Rats for Snakes and Other Reptiles