Earwigs are an ideal size (1- 1¼ inch) for both small and larger pets, and will be taken by animals ranging in size from Green Anoles to American Bullfrogs.  They climb well, and quickly attract the attention of treefrogs and arboreal lizards.  Despite the tough wing covers and pinchers, earwigs seem readily digestible, are not known to cause any related problems.  As with crickets, earwigs should not be offered to ailing or debilitated animals, or to expectant females, as they have carnivorous tendencies.

The world’s 1,800+ earwig species are placed in their own order, Dermaptera.  Twenty-eight species – most introduced from elsewhere – occur in the USA.  In the northeastern USA, I most frequently encounter the European Earwig, Forficula auricularia, which was first recorded here in 1907. Uploaded to Wikipedia Commons by Bugboy52.40

“Pinchers” on the abdomen and short, leathery wing covers (tegmina) lend earwigs a distinctive appearance.  There are several flightless species; others fly only when necessary.  I have seen the pinchers utilized as a defense against wolf spiders, but to no avail; they do not present a hazard to most herps or people. Males have curved pinchers, while those of the female are straighter in shape.  Chemicals known as quinones are released in defense, but these have not deterred any of the animals I’ve worked with.

Earwigs are nocturnal and shelter below cover (boards, rocks, within flowers) or in self-dug tunnels by day.  They feed upon carrion, decaying vegetation, fruits, fungi, moss, small insects and a wide variety of other foods.  Many frequent rose bushes and other flowering plants, where they consume pollen and transfer some in the process.  A few species appear to be specialized predators, but most are consummate omnivores.

Female European Earwigs (and others) care for their eggs by moving them about (perhaps to control temperature, humidity and fungus) and chasing off predators.  They remain with the young until their first molt.  Females of some species carry food to the hatchlings, while others provide regurgitated meals.  One female that had a burrow in my yard would “herd” the young below ground each time I disturbed the area…she was always the last in.  While visiting Japan, I was delighted to see that both zoos and private hobbyists keep earwigs; not so in the USA, unfortunately.

Earwigs release pheromones that attract others, which can result in large groups being found together at certain times of the years.  I recently collect over 60 under a single cinder block in western NJ.  Pairs sometimes overwinter together, with the female driving the male away in spring.  Search for earwigs below dead logs, boards and in other likely hiding spots.  Bring along a hand shovel, so that you can scoop up the surrounding earth, as they flee in all directions when disturbed.  Earwigs also shelter among the leaves and flowers of certain bushes, where the “bush beating” collecting technique works very well; please see this article for details.

Trapping earwigs is quite simple.  I use banana skins, ripe fruit and fish flakes as bait, but nearly any human food will work.  Earwigs climb well, but are thwarted by coffee cans, so these are my containers of choice.  If you add lots of banana skins or damp newspaper, the earwigs will often stay put even if able to escape.  Traps can be buried in the ground or placed alongside a tree or other structure that allows easy access.  I thwart raccoons, and other bait-stealers (usually!) by placing bait jars deep within rose bushes. 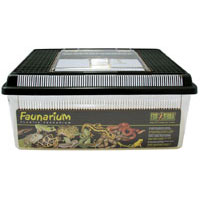 The most difficult aspect of earwig care is keeping them confined. They can scale most glass and plastic, and will squeeze through the tiniest of openings.  Plastic terrariums, especially “flat styles”, work well if insect screening is secured over the air vents.  Alternatively, you can place an old towel over the top of the terrarium, and secure the cover above this.  Plastic storage containers and old aquariums can also be put to use as earwig enclosures.

A mix of coconut fiber and leaf litter works well as a substrate; cork bark or other cover should also be available.  The substrate should be kept moist via daily spraying.  I house earwigs in a cool basement, but normal room temperatures will suffice.

When it comes to nutrient-loading, earwigs are as easy as most roaches; it is quite simple to provide them with a healthful diet.  I use a variety of fruits and vegetables, fish flakes, leaf litter and Cricket Gutload Supplement, into which I mix a generous amount of Zoo Med ReptiCalcium.  Vegetables and fruit provide earwigs with water, but they will also utilizeCricket Water Pillows.

Captive breeding on a large scale would likely be difficult, as gravid females seclude themselves from others.  But, as mentioned above, it is a fascinating project for those interested in insect behavior.