In Part I of this article I wrote about the huge numbers of Spotted Salamanders, Spring Peepers, Tiger Salamanders, Wood Frogs and other amphibians that are right now (March/April, 2010) approaching and entering their breeding ponds.  Today I’ll highlight some important programs that you can become involved in if you wish to observe and help protect this wonderful yearly phenomenon. END_OF_DOCUMENT_TOKEN_TO_BE_REPLACED Chemicals (pesticides, Atrazine, gonadotrophin) and Their Effects on Frog and Fish Sexuality and Reproduction

May 6, 2008 Comments Off on Chemicals (pesticides, Atrazine, gonadotrophin) and Their Effects on Frog and Fish Sexuality and Reproduction 3378 Views 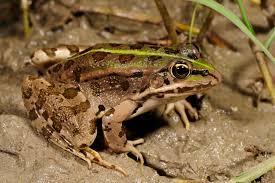 Amphibians and fish are highly susceptible to even minute amounts of foreign chemicals in their habitats. As such, their current population declines should serve as an important “early warning signal”, forecasting problems that will eventually affect other animals and ourselves.

An odd twist to this sensitivity issue among frogs is that an injection of gonadotrophin, a human growth hormone, brings many species into breeding condition. This discovery was a boon to captive breeding programs, as most frogs require the duplication of certain environmental cues – dry or wet seasons, for example – if they are to breed normally. However, things can easily go wrong – while using hormones to stimulate breeding, I and others have noted that some male frogs began to develop organs resembling ovaries.

Now, male frogs in the wild are being found to have inter-sex characteristics, including immature eggs within the testes. A recent Harvard University study found such characteristics in 21% of the male green frogs, Rana clamitans, in ponds in suburban Connecticut. It seemed that the affected frogs were more common in suburban than agricultural areas, but other studies have yielded opposite results. Similar reproductive system changes have been documented among catfish in Africa, sturgeon in the Mississippi and other fishes.

Pesticides, the herbicide Atrazine, and other chemicals commonly found in water and soil have been shown to affect sex hormone development, but much more research needs to be done.

There is a great deal of ongoing research in this important area – please read any related articles that you may come across and write in to share new information.

An article describing research into the effects of Atrazine on amphibians is posted at:http://www.pubmedcentral.nih.gov/articlerender.fcgi?artid=1247376