“Salt Water” Snapping Turtles – Snappers and other Turtles in Estuaries 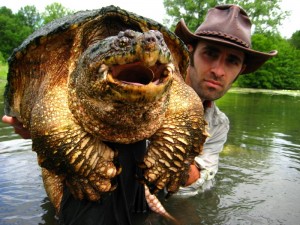 The incredible diversity of life in tidal creeks and rivers has attracted me since childhood.  And while invertebrates and fishes predominate, areas where fresh and salt water meet hold wonderful surprises for reptile enthusiasts as well.  Today I’d like to discuss a turtle that I often find in brackish water habitats, and which seems to be evolving unique adaptations to survive there – the Snapping Turtle, Chelydra serpentina.

The Long Island (NY) tidal creeks (please see photo) that I frequent seem “paved” with crabs, marine worms, snails, bottom fishes, mussels, clams, shrimp and other foods that could be easily exploited by turtles.  In fact, research indicates that at least one marine turtle, the Kemp’s Ridley, actively migrates to the LI Sound, gaining up to a pound per week during the time it remains there.  The Snapping Turtles I’ve seen in such habitats have been quite large, and I can’t help but think that abundance of high quality, easily-caught food must play a role in their presence.

I’ve even been fortunate enough to come upon a family of River Otters in one tidal creek, a species long gone from LI but now making a comeback.  I’ve worked with captive otters, and can attest that if they are present, there’s lots of food about – their appetites are unbelievable! END_OF_DOCUMENT_TOKEN_TO_BE_REPLACED The Rosy Boa (Lichanura trivirgata) and several of the Sand Boas (Eryx spp.) are among the most unique of the 53 species in the family Boidae.  They are excellent choices for both beginning and advanced keepers, especially those with limited space.  Stoutly-built but averaging only 24-30 inches in length, these “big snakes in a small package” are hardy, relatively easy to handle and breed, and adapt well to small enclosures.

Rosy and Sand Boas have made similar adaptations to their environments, but live on opposite sides of the globe – a phenomenon known as convergent evolution.  Both are highly-specialized burrowers, spending most of their time below-ground in warm, dry habitats.  Along with the equally-unusual Rubber Boa (Charina bottae) and African Burrowing “Python” (Calabaria reinhardtii), they are classified in the subfamily Erycinae. END_OF_DOCUMENT_TOKEN_TO_BE_REPLACED

Estimated at 30 million species, insects are the largest invertebrate group.  To put their numbers in context, consider this – the weight of insects in most African rainforests exceeds that of all resident vertebrates combined!  This statement takes into account such huge mammals as forest elephants and gorillas, and the incredibly numerous bats and rodents!   Insects are abundant outside the tropics as well – an acre of Pennsylvania soil may hold 425 million individuals, while New York is home to over 4,125 beetle species.  END_OF_DOCUMENT_TOKEN_TO_BE_REPLACED

The threat currently facing amphibians are unprecedented. At least 200 species have become extinct in recent years, prompting some to compare this “Sixth Extinction Crisis” to the disappearance of the dinosaurs.  END_OF_DOCUMENT_TOKEN_TO_BE_REPLACED

Today I’d like to cover a snake that, while not suitable as a pet, stands out in the minds of many as North America’s most impressive serpent – the Eastern Diamondback (Crotalus adamanteus). In my youth, the nearby Staten Island Zoo’s Reptile House was under the direction of the legendary Carl Kauffeld.  The collection contained every known rattlesnake species but, somehow, a massive pair of Eastern Diamondbacks stood apart.  Several years ago, I was thrilled to be chosen as consultant for the renovation of this building , and Rattlesnakes, including the Eastern Diamondback, again take center stage there.

The record length of this largest of the world’s 33 rattlesnake species is 8 feet, 3 inches; most adults top out at 3-6 feet.   In the USA, only the Indigo, Bull, Gopher and Black Rat Snakes approach or, very rarely, exceed this measurement.

The background color of this heavy-bodied, venomous snake ranges from olive through brown to (rarely) near-black.  The back is patterned in white-centered dark diamonds that are sharply outlined in cream or yellow.

Captives have lived in excess of 22 years, but longevity in the wild has not been well-studied. END_OF_DOCUMENT_TOKEN_TO_BE_REPLACED