Posted by: Frank Indiviglio in Terrariums and Vivariums September 9, 2014 Comments Off on Terrarium Safe Plants: Tips for Avoiding Pesticides 10699 Views Uploaded to Wikipedia Commons by רנדום

Each year, a wider variety of beautiful and interesting live plants becomes available to keepers of amphibians, reptiles, scorpions, tarantulas and other terrarium animals. Responsible suppliers to the pet trade should propagate plants without relying upon pesticides, but many hobbyists are rightly concerned about the possibility of poisoning their pets. While working at the Bronx Zoo, I had access to professional horticulturists who provided me with some safety measures one can employ to assure that plants are safe for use in terrariums.

Pesticides may be classified by the site at which they exert their effects. Surface pesticides remain on stems and leaves, and are usually mixed with adherents in order to improve their sticking power. Adherents are chemical compounds that may also be harmful to terrarium animals. Systemic pesticides diffuse into plant tissues – these are less commonly used on house and terrarium plants than are surface-acting chemicals.

Many species that are marketed as house plants are much favored by animal-keepers as well. Included among these are pothos, peace lilies, Chinese evergreens, cast iron plants and snake plants. These plants have almost certainly been treated with pesticides, as they are grown in large propagation operations, and not specifically sold for use in terrariums.

Various ferns, mosses, bromeliads and carnivorous plants raised by those who target pet keepers as customers may or may not be pesticide free (please see below, and post a comment for further information).

Risks to Reptiles and Amphibians

The skins and exoskeletons of reptiles and most commonly-kept invertebrates may be relatively impervious to pesticide poisoning by casual contact. However, traces may enter the animal if tracked onto food, or, perhaps, via the pedipalps of spiders. Herbivorous species may also sample plants, including those generally considered to be distasteful.

Uploaded to Wikipedia Commons by Charlesjsharp

Amphibians are very sensitive to chemicals of any type. Their porous skins allow substances as small as oxygen molecules to enter the body, and pesticide toxicity has been well-documented in field and lab studies (I once observed autopsies of male African Clawed Frogs that had been exposed to a common pesticide…the unfortunate fellows had developed ovaries!). While tree frogs and others that spend their time on plants are most at risk, pesticides can also diffuse through the tough skins of desert dwellers such as the Colorado River Toad.

Plants treated with surface pesticides can be rendered safe by washing with water. Be sure to rub the leaves, stems and roots with a clean sponge, and rinse well; submerging the plant and swishing it about afterwards is also useful. I always discard the soil that arrives with plants, as pesticides that have dripped off the foliage during application will accumulate there. Vinegar, lemon oil and other products are frequently recommended as well, but I’ve not found these to be necessary.

There aren’t any well-established practices where systemic (absorbed) pesticides are concerned. Horticulturist co-workers at the Bronx Zoo suggested a 30 day waiting period before any suspect plant was placed into an exhibit. I did well with that protocol at the zoo, and have continued to use it in my personal collection.

Most terrarium plant suppliers rely (or claim to rely!) upon pesticide-free growing practices. I do not have much recent experience with any of the major growers, but can ask colleagues in the zoo and private trade for their opinions if you are unsure of your source. Please post any questions or comments below.

The Peace Lilies in the Terrarium

2014-09-09
Frank Indiviglio
Previous: Turtle or Tortoise – Which is the Best Reptile Pet for Me?
Next: Butterworms as Reptile-Amphibian Food: Nutritional Content and Care 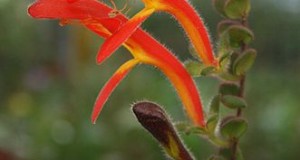 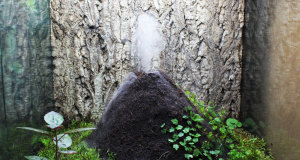