Artificial reefs have been used by fisherman for hundreds of years for attracting fish, providing structure, and allowing more fish to be caught easily.  These traditional reefs were typically made from submerged logs that were tied together, or some other simple object.  Shipwrecks sites have also long been used for fishing areas, because of all the fish that they attract.

In modern times, the use of artificial reefs has exploded, and large scale reefs are being used for a variety of reasons, including improving commercial fish stocks by increasing habitat for small fish, sport fishing , recreational SCUBA diving, and wave attenuation and beach erosion control for coastal communities.  There is even a television reality show called Reef Wranglers on the Weather Channel, which features one of the most prominent builders of Artificial reefs in the US, Walter Marine.  Use of Artificial Reefs in tropical waters of the world can also have an impact on the aquarium hobby, they attract all kinds of fish and invertebrates, and can be  used for structure in farming corals. 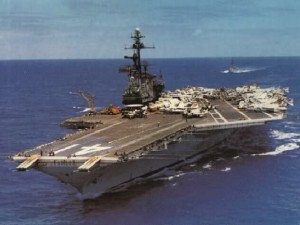 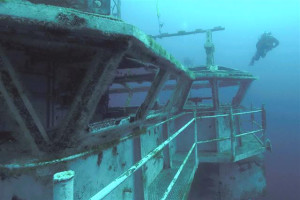 U.S.S. Oriskany in its new home

The title for World’s Largest Artificial Reef is currently held by the State of Florida, with the sinking /Reefing of the U.S.S. Oriskany.  The Oriskany is an Essex Class Aircraft Carrier commissioned in 1950, and served in both the Korean and Vietnam Wars.  Decommissioned in 1976, the Oriskany began its new life as an artificial reef in 2006.  After extensive preparation for environmental safety, the 900 ft vessel was intentionally sunk of the coast of Pensacola Florida, where she now sits upright at a depth of about 215 ft.  Dubbed the “Carrier Reef”, in honor of Australia’s Great Barrier Reef, the massive ships tower reaches to about 70 ft from the surface, making it a popular diving and fishing site.  There are many great videos available on youtube about the Oriskany, here is one of the sinking. 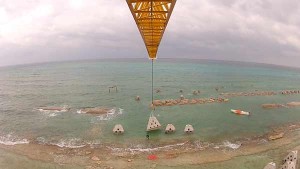 The U.S.S. Oriskany won’t be the biggest artificial reef for long.  Currently under construction in the State of Quintana Roo Mexico, is the massive Kan-Kanán project, known as the Guardian of the Caribbean.  When completed, the Kan-Kanán reef will stretch for 1.9 km (1.18 miles) along the coast of the Yucatan Peninsula.  Constructed from over a thousand individual concrete pyramids, each weighing 10 tons, the reef is being put in place to help try and stabilize the local fish populations, as well as control beach erosion that has been occurring due to climate change and environmental degradation from human activities.  From above, the reef will look like a giant serpent that stretches along the coast, which is where its name comes from.  Kan-Kanán is Mayan for “Protecting Serpent”.

Fear not Floridians, you may not lose your title as owner of the world’s largest reef for long.  Announced earlier this year, Collier County Florida will be the future home of an enormous reef project. Using funds established in the wake of the BP oil spill disaster in the Gulf of Mexico, along with local governments, and Non-Profit organizations, the Planned reef will consist of six 500 ton reefs, each the size of a football field.  More funding is still needed, and can be made as a tax deductible contribution.  For a mere $100,000 you can even have one of the reefs named after you.

Some strange things have been used for Artificial Reefs.

Whatever you have visualized in your mind as an artificial reef, you are correct, no matter what you imagined.  An artificial reef can be made from most anything, so long as it poses no environmental threat.  And wow, have some strange things been used as reefs over the years, here are a few of my favorites. 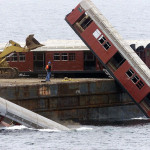 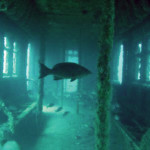 New York City Subway cars.  The east coast of the United States is the final resting place for thousands of decommissioned subway cars.  Most folks probably don’t even know they are there, but offshore from the popular NJ, MD, DE and VA beaches lay a huge network of old subway cars.  Directly off shore from Indian River Inlet in Delaware is RedBird reef (named after the famous New York Subway RedBird subway cars) which has upwards of 700 cars alone. 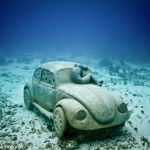 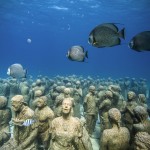 Statues and Sculptures.  The Mexican government commissioned British Artist  Jason de Caires Taylor to build the Cancun Underwater Museum.  Located with a Marine Park, this underwater museum features over 400 life size sculptures and statues ranging from a VW Beetle, to life size humans, to a small house.  One of the most famous underwater sculptures in the world, Christ of the Abyss, is located in Key Largo Florida, and is visited by thousands of scuba divers (and fish) every year. 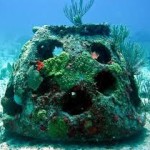 You and Me. That’s right, you can have yourself made into an artificial reef.  Eternal Reefs, is a company that will take your cremated remains, and incorporate them into a concrete reef structure.  Many reef options and locations are available, not a bad way to spend eternity if you ask me, nice view.

Thanks for reading, until next blog.