In Part 1 of our blog “Understanding Active Ingredients in Antibacterial Fish Medications“, we discussed active ingredients primarily used to treat bacterial infections. Next in this series is anti-parasitic medications. These ingredients are used to treat for different types of parasites.

Parasitic infections or infestations in aquariums can be internal (inside the fish or invertebrate) or external (on the outside of the animal, on tank surfaces or in the substrate), as well as microscopic or large enough to see with the naked eye. Use caution with these medications as most may also destroy sensitive fish and invertebrates.

Copper has long been one of the “go to” medications for parasite treatment in aquariums, especially for treatment of “Ich”, and protozoan parasites. Copper sulfate is the most common form in most copper-based medications but chelated copper treatments are also available as a potentially safer alternative. Copper-based medications are usually used to treat parasites and even some algae outbreaks, but since it is a heavy metal, it can be very dangerous to invertebrates and some fish.  Monitoring Copper levels during treatment is extremely important, to maintain effective levels, and to prevent disastrous overdoses. Even after treatment is over and most of the copper has been removed using carbon or another filter media, residual copper can be left behind in the aquarium.

Fenbendazole is the active ingredient in many dewormers. It is used most commonly to treat mammals including cattle, sheep, and other livestock but is also used less commonly for reptiles, amphibians and fish. It is effective against internal parasites like roundworms, tapeworms, hookworms and others but for aquarium purposes, it is usually used to eliminate planaria (a type of flatworm), calamus worms (an internal parasitic worm) and hydra (related to corals and anemones, usually seen on the glass or rocks). This is regarded as a very strong medication but is one of the few considered reliable for these parasites.

While not an actual “medication”, I include garlic because it is a very popular nutritional supplement that has been proven to be helpful in recovery and treatment for some diseases. It is an appetite stimulant in many fish and can help encourage even finicky eaters to feed. Garlic is also a power antioxidant that has been shown to improve a fish’s own immune system and help them fight off a condition on their own. Some believe that the garlic may “taste” bad to the parasite and cause them to fall off of the fish, but it is more likely that the fish is able to fight the parasites off on its own because of the extra nutritional boost it receives. Although garlic extract from any health food store can be used in aquariums, formulas manufactured specifically for aquarium use are generally best and often also contain Vitamin C or other vitamins and minerals. At any rate, this homeopathic herbal additive is not a true medication, has no measurable side effects, and is beneficial as a supplement for most freshwater or saltwater fish.
END_OF_DOCUMENT_TOKEN_TO_BE_REPLACED

Happy Holidays from the TFP family to yours!

The team here at That Fish Place – That Pet Place would like to take a moment to wish all of our readers a Happy Holiday and a great New Year. Thank you for reading our blog – we hope to see you back soon! 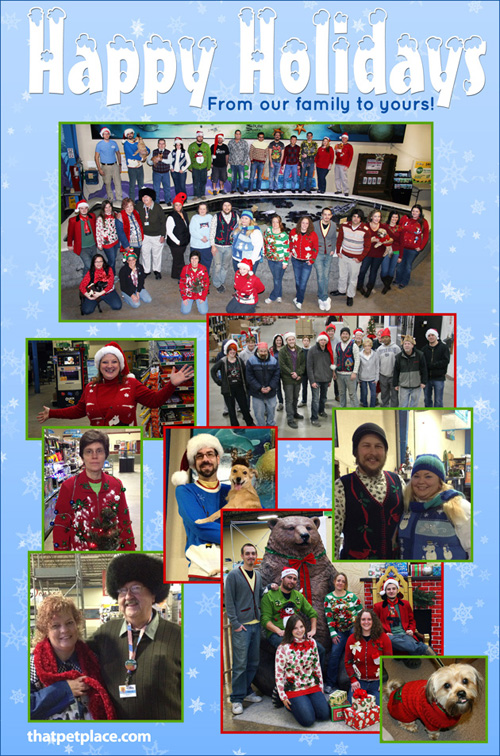 The “-cillins” have been well-known for decades as popular treatments for human infections, but some aquarium medications are also made with these active ingredients. All three derivatives are used to treat bacterial infections. Amoxicillin is the most broad-spectrum of the three and treats Gram-positive and Gram-negative infections. Ampicillin treats some Gram-negative infections but is most effective on Gram-positive bacteria. Penicillin is used for Gram-positive bacteria. Aquarists who are allergic to Penicillin or any other -cillin derivatives should use extreme caution if using these medications in their aquarium.
END_OF_DOCUMENT_TOKEN_TO_BE_REPLACED

Today I’ll highlight some fish-keeping items that I’d be pleased to give or receive as holiday gifts. For the most part, I’ve focused on Reverse Osmosis Systems and Ultraviolet Sterilizers, both of which lessen our workload while enhancing fish and invertebrate survival.  I was first introduced to these tools while working in zoos and public aquariums, and am happy to see that reasonably-priced models are now available for home use. 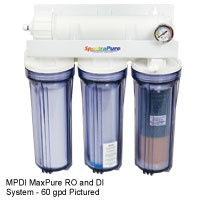 I first began working with reverse osmosis (RO) systems about 15 years ago, while trying to correct water quality problems that plagued the amphibian collection at the Bronx Zoo.  Those I used were effective, but also huge, complicated, and difficult to maintain…I hated them!  Today’s home units are much more user-friendly; instruction manuals are posted online (please see links to individual products below), and customer support is readily available.
END_OF_DOCUMENT_TOKEN_TO_BE_REPLACED

Whether you have live plants in your tank or not snails can appear in your tank and quickly boom in population. While they have their benefits as algae eaters and detritivores, they can become a nuisance if the numbers aren’t kept in check. Generally, for common snails we recommend botia loaches including Skunk Loaches, Clown Loaches and YoYo Loaches. These fish like to indulge on young snails and snail eggs, so they can get you ahead of the problem. However, they can be pugnacious and even a little aggressive in some cases, so they may not be a good idea in a tank with very small or docile fish.  True Siamese Flying Fox fish are another great solution, if you can find them in the trade.  If you’re plagued with Malaysian Trumpet Snails, your options may be more limited. These snails have much tougher shells than the common little snails that sneak in on live plants, and they can only be ripped out of the shell by specialized eaters with very strong mouthparts.   While the loaches may be able to handle very small Trumpet snails, larger versions will be too tough.  Some cichlids, including several Julidochromis species develop a taste and talent for eating snails, and C. rhodesii is also a known specialized feeder for trumpet snails. END_OF_DOCUMENT_TOKEN_TO_BE_REPLACED