The “-cillins” have been well-known for decades as popular treatments for human infections, but some aquarium medications are also made with these active ingredients. All three derivatives are used to treat bacterial infections. Amoxicillin is the most broad-spectrum of the three and treats Gram-positive and Gram-negative infections. Ampicillin treats some Gram-negative infections but is most effective on Gram-positive bacteria. Penicillin is used for Gram-positive bacteria. Aquarists who are allergic to Penicillin or any other -cillin derivatives should use extreme caution if using these medications in their aquarium.

Erythromycin is a antibiotic very similar to Penicillin. It is more effective in freshwater aquariums than in saltwater but can be used to treat difficult eye problems. Some aquarists also recommend Erythromycin to treat cyanobacteria blooms but this should be used with caution and the cause of the cyanobacteria still needs to be addressed. While Erythromycin is useful with especially gram-positive bacterial infections, it can also kill the usefully nitrifying bacteria in the tank and may cause some instability while the helpful bacteria population recovers. Avoid using this medication if the bacteria population is already unstable, like in new or newly established aquariums.

Furazolidone and Nitrofurazone are closely related anti-bacterial medications that are often used together in medications. These medications can be used in freshwater and saltwater and are often used with pond fish to treat Aeromonas infections. It is also often recommended to treat Columnaris, Vibrio, and Furunculus. While it can be helpful against marine skin infections, it usually works better in lower pH environments. Nitrofurazone is usually found in yellow crystal-form and can temporarily dye the water yellow.

Kanamycin sulfate is another antibacterial medication but unlike Furazolidone and Nitrofurazone, Kanamycin is most effective in higher pH and is therefore more effective in saltwater than in freshwater, although it can be used in either. Kanamycin targets mostly gram-negative bacteria but will also work on some gram-positive bacterial infections. It is considered safer for the biological filtration in the tank than medications like Erythromycin. Kanamycin is recommended for conditions like dropsy, pop-eye, columnaris, and septicemia. 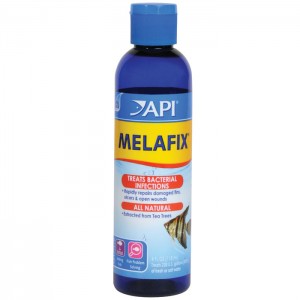 Melaleuca oil comes from the Tea Tree, Melaleuca alterniflora, an Australian native similar to the Myrtle trees in the United States. The oil from this tree is antibiotic and is used in not only aquarium medications but also in human and animal antiseptics to help kill bacteria on wounds and dry up some skin conditions (you can usually buy Tea Tree oil in the first aid section of your pharmacy to treat poison ivy and similar conditions). Aquatic medications use melaleuca oil as an antibacterial medication. It is not as strong as some of the other antibiotics and antibacterials that have already been mentioned, but it is gentle and effective against mild problems like frayed fins due to bullying.

Neomycin sulfate is very popular in home first aid kits as an active ingredient in the antibiotic Neosporin®. It is also used in aquarium medications as a broad spectrum antibiotic used to treat bacterial infections and wounds. Some research has also shown that Neomycin may have some impact on some of the notoriously resistant bacterial infections like Aeromonas, Pseudomonas and Mycobacteria. Neomycin can be found in powders forms, in liquid medications, and in some topical solutions much like the Neosporin® used on our own cuts and scrapes.

Much like Sulfathiazole, Tetracycline is a bacteriostatis antibiotic – it prevents bacteria from producing the proteins it needs to multiply. Tetracycline can be used to treat a wide range of bacterial infections, both gram negative and gram positive, but is only for use in freshwater aquariums.

Keep an eye out for next week’s continuation where I’ll be discussing common anti-parasitic medications and their active ingredients. Let us know in the comments if you’ve had any particular successes with any of the medications listed above!