Skyrocketing in popularity over the past few years, Mantis Shrimp have gone from nuisance invaders to a specialty aquarium niche all their own (and a new superstar among viral animal posts thanks to comedic websites like The Oatmeal and zefrank’s YouTube videos). By far, the most popular of these crustaceans is the Peacock Mantis Shrimp, Odontodactylus scyllarus, but there are many other species that are just as fascinating and deserving of attention. We’ve featured mantis shrimp in general in several previous blogs; in this entry, we’ll investigate some of those other mantis shrimp that you may not hear about or see as much in media. 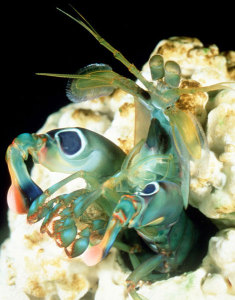 Smith’s Mantis Shrimp, Gonodactylus smithii
Its name may not be too familiar, but this mantis is one of the most photographed species due to its trademark meral spot. As you may remember your mantis shrimp anatomy from our other posts, the “meral spot” is a pair of false eyespots on the mantis’s raptoral appendages (the gonna-hurt-you limbs). If you held your arms in front of you, the meral spots would be on the inner sides of your elbows. The Smith’s Mantis Shrimp is well known for these spots because they are some of the most easily-identifiable: bright purple with a defined white outline. They give the Smith’s Mantis Shrimp its other common name, the Purple-spotted Mantis Shrimp. The body color of the Smith’s Mantis Shrimp is otherwise pretty similar to the Peacock Mantis, often bright blue-green and sometimes with red trim to each body segment. This species is a “smasher” and while it isn’t available as often as some other species, it is very sought-after by collectors when it is. 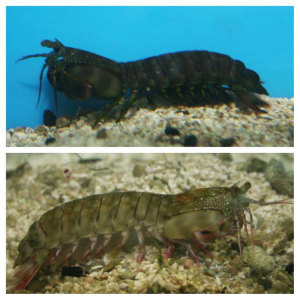 Chiragra Mantis Shrimp, Gonodactylus chiragra
This is one of the most common mantis shrimp that we receive at our store and is one of the best suited for aquarium life. It is the largest of the Gonodactylus genus of “smashers” but still only reaches about four inches in length. Unlike many other species, it is pretty easy to tell the difference between males and females. Male Chiragra Mantis Shrimp are usually blue-green in color while females are a mottled tan and cream. Both genders have a white meral spot that is far less obvious than the Smith’s. The most distinctive feature of this species regardless of gender is the light-colored sprinkles on the front corners of the carapace in the same place as the Peacock Mantis’s distinctive leopard spots. 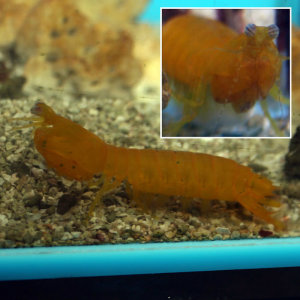 This is one of my favorites. Not only is it a “spearer” when most of the more common species are “smashers” but they have one of the coolest defining traits…checkerboard eyes. All mantis shrimp have extremely complex eyes and three different “sections” can be seen on most of them. The Ciliata Mantis Shrimp also has vertical lines overlaying the horizontal segments so their eyes, if you can get close enough to see it, have a checkerboard-like plaid pattern on them. Most of the Ciliata Mantis Shrimp you’ll see in the aquarium trade are green or yellow but their color and even pattern can change every time they molt depending on their environment and the lighting. 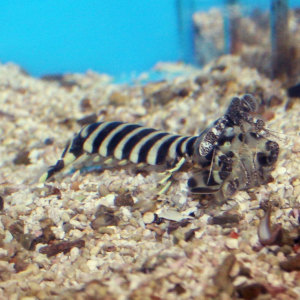 Zebra Mantis Shrimp, Lysiosquillina maculata
It is easy to see where the Zebra Mantis Shrimp gets its name. It has alternating black and cream-colored stripes. It also has white speckled antennal scales and eyes. However, it is unique in that, like the Ciliata Mantis, the Zebra Mantis is a “spearer”. Rather than hiding in rockwork caves like most “smashers”, these mantis shrimp will build deep burrows in the sand or substrate, reinforced with mucus, where they wait to ambush their prey. This species also has the distinction of being the largest of all mantis shrimp. While most of the Zebra Mantis Shrimp that you’ll find available to aquarists aren’t much larger than any other species available yet, they can grow to over fifteen inches in length!

These are just a few of the more common mantis shrimp other than a Peacock Mantis Shrimp but there are many other species that become available from time to time. So, don’t limit yourself if you are brave enough to head down the road to try these cool creatures!