Uploaded to Wikipedia Commons by Haps

Faced with “an embarrassment of riches”, catfish enthusiasts usually find it impossible to single out a favorite species.  Those in the genus Synodontis – boldly-marked and fascinating to observe – are a case in point.  Each time I’m introduced to a new species, I find some quality that draws me to learn more about it.  But if the Angelicus Squeaker, Synodontis angelicus, is not the most sought after of all Synodontis cats, it certainly is in the running.  Also known as the Black Clown Catfish, Angelicus Synodontis, Polka-Dot Synodontis and Angel Squeaker, it is both breathtakingly-beautiful and extremely interesting in its habits. And dedicated aquarists have the opportunity to broaden our understanding of the little-studied species, as captive breeding success has remained elusive.

The Angelicus Squeaker’s jet black, dark gray or deep purplish coloration is beautifully offset by numerous yellow or white spots.  Some have described it as having the opposite color pattern of another popular relative, the Cuckoo Squeaker, S. multipunctata (please see photo below).  Color and spot patterns vary greatly, and individual fishes are capable of radically changing their background colors.  Health, stress, age, sex and other factors are likely involved, but much remains to be learned.  Fishes involved in aggressive encounters or, perhaps, courtship, sometimes lighten to almost white in color.

The maximum size reported is 9.4 inches, but detailed field surveys have not been carried out, and there are rumors that much larger individuals have been seen.  Growth appears to be rather slow, at least by pet catfish standards.

This river-dwelling catfish has a large range, but details concerning its exact distribution are sketchy.   It is known to occur throughout much of the Congo Basin, and has been reported from Cameroon, the Democratic Republic of the Congo and the Congo Republic.

Angelicus Squeakers remain rather subdued during the day, unless food is detected, but they are very active by night.  Although success has been had in smaller accommodations, I believe it best to plan on a 55 gallon aquarium for 1-2 adults.

Angelicus will not thrive if forced to remain in the open.  As they can be quite picky when it comes to choosing a hideaway, a variety of caves, hollow logs, driftwood refuges and similar structures should be provided. .  This is even more important when 2 or more Angelicus Squeakers are housed together, as battles over favored hiding spots are common.  Once a retreat is chosen, your fish will likely remain faithful to it.

Additional security in the form of well-rooted live or artificial plans should also be added.  Fishes kept in complex environments will exhibit a greater variety of natural behaviors than those denied access to hiding places…you’ll wind up seeing of your fish, and more of interest!

I like maintaining this and similar Synodontis cats on sand, as they keep very active by rooting about for food.  If displaced sand causes problems in your aquarium, they will also do well on smooth gravel. 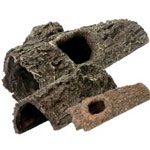 Several friends working in public aquariums and for fish importers have reported seeing what appear to be heater burns on Angelicus Squeakers.  I have not seen this in my collection.

I’ve successfully kept groups of 6-8, but they must be watched carefully, especially at night.   Angelicus Squeakers guard their caves, and we know little about male-male rivalry or aggression that may occur when pairs are courting.

They may also be kept with similarly-sized peaceful or moderately aggressive fishes of other species. Active top-feeders will out-compete most catfishes for food, so night-feeding and other accommodations to bottom-feeders will be necessary.

I’ve not tried hosing Angelicus with other catfishes, and, in most situations, would avoid any fish that is dependent upon caves for shelter.

Angelicus Squeakers are opportunistic feeders that will readily consume all manner of flake, pelleted and frozen fish foods.  Mine especially relished crushed crickets, blackworms and fresh and freeze-dried shrimp.

Individuals maintained on flakes and pellets alone do not do as well as those provided a diet comprised of live and frozen invertebrates.

Despite the high demand for these beautiful fishes, captive breeding has not been documented, and little is known of their reproduction in the wild (other than that they are egg-scatterers).  Eggs have been produced by Angelicus Squeakers in several private and public collections, but none have hatched.  Anecdotal reports hint that hormone-based breeding has been accomplished in Europe, but details are not available.

I’m sure that the key to success lays in a detailed study of their natural habitat…pH, temperature or water level changes may be involved. Where captive spawning has occurred, hatching failures may possibly be linked to nutritional deficiencies. Increased amounts of live and protein-rich foods were offered prior to spawning in some cases.  Please let me know your thoughts (or, hopefully, successes!) on this important topic by posting below.