Eileen here. One of the most common aquariums problem we are asked about is one that is known in the hobby as “New Tank Syndrome” (NTS). No, its not the compulsive tendancy to spend three-months pay on things to fill your new aquarium. “New Tank Syndrome” is caused by the bacteria blooms that occur when a tank is cycling. Both freshwater and saltwater tanks experience NTS when the ammonia, nitrite and nitrate levels spike as a result of the cycling process of the tank, but most of the questions come from the “algae bloom” that saltwater aquarists tend to see towards the end of the cycling of their tank.

A few weeks after the tank has started cycling (after live rock, fish or a bacteria culture has been added), you may see a thin brown film covering the surfaces and sides of the tank. This film scrapes or wipes off easily and cutting back lighting doesn’t seem to affect it. No snails, hermit crabs or fish feed on it, but critters moving across the substrate or glass tend to stir it up enough so it “goes away.” So, what is going on at this point?

The “algae” you see is not a type of plant with cells like traditional green algae that most people think of. It is actually made up of diatoms, a type of phytoplankton whose cell walls are primarily made up of the mineral silicate. It blooms towards the end of the cycling process in a tank because of the imbalance of nutrients in the system but will usually die off on its own once the water chemistry in the tank stabilizes.

Here’s an easy analogy for what is happening: Imagine you have a huge set of scales you are trying to balance. To try to get the scales even, you pile bird seed on each side until they are even, but in the process, lots of the seeds spills onto the ground. Flocks of birds come to the field to feed on all that extra seed on the ground but once you have the scales balances, no more seed is spilling on the grounds where the birds can get it so they leave.

The same thing eventually happens in your aquarium. Once the water chemistry balances and there are no spikes in the ammonia, nitrite, nitrate or other mineral levels, the diatoms lose what they were feeding on and the bloom will go away on its own without adding tons of snails and hermit crabs and without doing unneccessary water changes that will just slow down this process.

It takes a little patience to get through the cycling process and the diatom algae blooms we know as “New Tank Syndrome” but less is sometimes more in helping your new tank get established and ready to handle all of the plans you have in store for it!

Tagged with: New Tank Syndrome Setting up an Aquarium 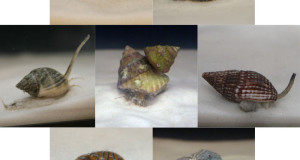 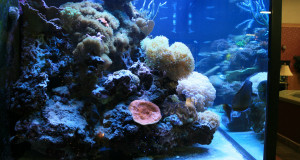 Aquarium Gravel and Substrate vs Bare-Bottom tanks: Pros and Cons