The culture of live algae and plants in brackish aquariums has not been given much attention, and few plants native to estuaries and similar environments are commercially available.  However, as with fresh water tanks, live plants add a whole new dimension to aquarium-keeping, and are extremely interesting in their own right.

In brackish exhibits at the Bronx Zoo and in my own tanks, I have experimented with several varieties of algae and plants.  In addition to mangroves, Java ferns and other such estuarine-adapted species, a surprising number of plants and algae that are typically thought of as either “marine” or “fresh water” can be acclimated to brackish environments.  Following are a few of my favorites.

Plants and algae should be introduced carefully to a brackish water aquarium…treat them as you would a fish or invertebrate.  Particularly as concerns fresh-water plants, sudden changes in pH can wreck havoc with osmotic pressure, causing cell rupture and the death of the specimen.

Marine algae are commonly referred to as “seaweeds”, but they are in actuality not true plants.  Single or multi-celled, algae lack roots, stems and leaves, but have evolved equivalent structures. For example, holdfasts act as roots in anchoring them to the substrate, but do not absorb nutrients…that role is taken on by the leaf-like portions of the organism.

This is the most commonly-available marine algae.  It ranges from Florida and the Caribbean southward, and is commercially cultivated.  Caulerpa spreads via rhizomes, or runners, and, although a true marine algae, it adjusts well to brackish environments.

Like all algae, Caulerpa may leak fluids when pruned, so be sure to clip only a tiny amount at a time if trimming is necessary.  Related species, with rounded, pointed or fern-like shapes, are sometimes seen in the trade.

Other Types of Marine Algae

A number of other types of marine algae are sometimes available.  While not as well-suited to a brackish water existence as Caulerpa, several will adjust if care is taken in the acclimatization process.

To my knowledge, the Java fern is the only true brackish water aquatic plant that is regularly available to aquarists.  In well-lit tanks it will proliferate rapidly.  A number of fishes favor Java fern leaves as food, but its rapid growth rate can accommodate this in many cases.

Mangrove seedlings, or propagules, are semi-aquatic, with the roots usually submerged and the plant itself growing above water.  The red mangrove is often sold in the trade and is commercially propagated in Florida, where it also occurs naturally.  Red mangroves are extremely wide-ranging, being found along coastlines in many of the world’s tropical and subtropical regions.  At home in estuaries, salt marshes and along river mouths, they are adapted to fluctuating salinity levels, and fare well in brackish water aquariums.

Mangroves can be planted in mud or wedged into limestone, and, because of their semi-terrestrial nature, are best kept in aquariums housing mudskippers, fiddler crabs and other creatures that utilize both land and water areas.  They excrete salt on the surface of their leaves…this should be washed away with fresh water every few days.

Mangroves often grow slowly in the aquarium, and stay at a manageable size for some time.  There are a few techniques for dealing with tall plants…please write in if you would like further information.

Eelgrass is one of the only true plants to live an aquatic existence in marine environments.  It is not commonly kept in aquariums.  I have had mixed success with it, but have observed healthy stands in commercial aquariums (if you are interested in this plant, please write in and I’ll make some inquiries to public aquarium contacts).

Eelgrass populations have plummeted in the northeastern USA and elsewhere, and I encourage those with an interest to work with this plant (please note that collection is prohibited in California and elsewhere).  An incredible assortment of unique fishes and invertebrates, such as pipefishes, dwarf seahorses and eelgrass-shaped amphipods, are always found in association with eelgrass beds.

I commonly observe eelgrass in estuaries, lagoons and other brackish habitats, and it thrives in true marine water as well.

Next time I’ll discuss some of the many fresh water plants that can be acclimated to brackish conditions.  Please write in with your questions and comments.  Thanks, until next time, Frank Indiviglio.

Brackish environments are home to many fascinating fishes and invertebrates that do well in aquariums.  Please see my article on Mudskippers  for a look at one of the most unusual. 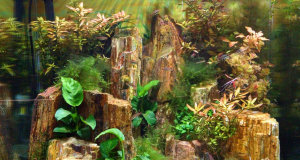