Jose here. Madagascar is the world’s fourth largest island, about the size of Texas or France, and has been isolated from the African mainland for over 160 million years. Madagascar is home to more than 250,000 species of which 70 percent are found nowhere else on the globe.

The first time I came across anything from that country was when I first saw a day gecko and thought wow the colors were amazing. And it wasnt until I came across my first Bleekeri at a cichlid show that my eyes were opened to the livestock of that great country. The fish was pushing maybe 11 inches in a 29 gallon and trying to attack anyone that stepped up to the tank. I needed one!!! I eventually got my hands on one, yay fun times. Spartacus ( yes i named him, later found out it was a her.. oops) in 1 year grew to 8 inches and was a pure terror to me, attacking my hand every time it was in the aquarium.

Now I wanted to breed these fish and as luck would have it she had passed away while I was on vacation. So back to Africans I went. Wasn’t maybe a year later that we got in some Paratilapia
Polleni: the small spot. I purchased 3, 2.5 inch fish for my 40 breeder – 1 dominant male, 1 female and a
younger male. The water conditions were ph 7.6, general hardness of 12 degrees and a carbonate hardness of 8 degrees, with a temperature of 78 degrees. They acclimated very well eating that same night. Their diet consisted of nightcrawlers, marine flakes, krill and marine pellets. The less dominant male was found dead 3 days later and the young pair had started hanging out in an ornamental tree trunk. After about a month and a half the male started becoming very aggressive: not so much with the female but with me. After some time of watching him attack my hands, the female caught on and joined in on the fun: sometimes attacking him, who was double her size.

Now here is where my hate relationship begins. At 6 months the male was a little over 7 inches and the female was close to 4 inches. Then came the day I was waiting for: their breeding tubes were displayed and they were both cleaning the top of a rock. Three days later they had laid what looked like about 200 to 300 eggs. The eggs were not laid on the rock like normal Central or South American egg laying cichlids, these eggs were pinkish orange in color and hung on a string which resembled mini grapes in a clump. The male and female’s aggression stepped up to a new level. And now begins the hate. I tried to take pictures of the parents and eggs and each time I did the male would look at me once and turn around and start eating the eggs. I thought nothing of it as it was their first spawn and I was just happy they bred. The second and third times both happened as I was heading to cichlid shows, and while I was away my girlfriend at the time kept an eye on them. They never once bothered the eggs while I was away, but when I got back and I looked in the tank there went the male eating the eggs again, a slap in the face. They never bred again after that. We shortly moved then and in the move I lost both fish. Temperature change was the culprit as it was 2 or 3 in the morning in October. It will be a while before I keep them again but I know I will. In closing they are fun and anyone who have kept Centrals will enjoy Madagascars.

Until then have fun with Cichlids!

Previous: Massive Stingray Migration in the Gulf of Mexico
Next: New Web Tool for Identifying Coral and Aquarium Fish in the Field – Coralidea.com 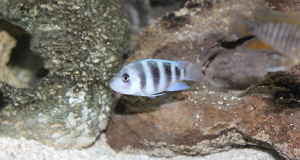 Aquarium Salt Mixes – Choosing the Right Salt for Your Tank