Home | How Much Does That Aquarium Cost? | 10-gallon-GloFish-Community 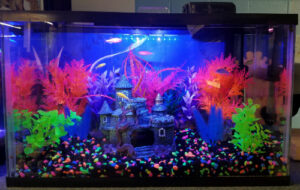