Home | Conservation | Why Keep Fish and Aquatic Invertebrates? – some thoughts for new and experienced aquarists

Why Keep Fish and Aquatic Invertebrates? – some thoughts for new and experienced aquarists

Hi, Frank Indiviglio here. When I first became involved with aquatic animals, it seemed that most people kept aquariums as an offshoot of a long-seated and intense interest in fish and other animals. Especially where marine organisms were concerned, the difficulties inherent in keeping all but the hardiest of creatures discouraged those with only a passing curiosity.

However, a wealth of information and technical advances has now greatly simplified life for those desiring an aquarium of their own. More and more, people are drawn to the hobby because of the sheer beauty of the animals that can be brought into their homes. It has been my experience that such people usually develop a deeper interest in their pets, and a sincere concern for their well being.

Expect Great Rewards
However you might come to aquarium-keeping, and whether you decide to focus on fresh water or marine animals, or both, you will gain an insight into worlds that have largely been beyond your reach. Even when keeping common species in the most basic aquarium set-ups, you will be privy to the secret lives of a host of fascinating organisms. The thrill of a first breeding success, or the observation of a rarely seen or even unknown aspect of animal behavior, is quite hard for me to put into words, even after all this time – but trust me, it is not to be missed.

The Captive-Wild Link
The life history details of many, if not most, of the world’s fishes and aquatic invertebrates are virtually unknown. The aquarist who takes the time to properly maintain both common and unstudied creatures stands an excellent chance of contributing to our understanding of them.

Most aquatic animals will exhibit a full range of natural behaviors only under ideal captive conditions. You must, therefore, learn as much as you possibly can about both the natural history and captive husbandry of your pets. Considering the destructive effects of human activities on wild animals and their environments, we should remember that every bit of information that is gleaned about a creature’s behavior will contribute, in a very real way, to its future survival in the wild.

Other Rewards
Aquarium keeping usually stimulates deeper interests in a wide range of related subjects. You, and those with whom you share your passion, will want to learn more and more about the animals that you keep – how they live, what prospects they have for continued survival and what must be to protect them.

For young children, especially those largely isolated from nature, an aquarium can be a call to new worlds, interests and careers (I am a case in point). I have observed that elderly people often find this hobby quite stimulating, and the sense of being responsible for the well-being of other creatures can become a healthy influence in their lives. My own grandfather started me off in the early 60’s, with seahorses, octopus and other creatures (often rescued from the pot at NYC’s Fulton Fish Market!) and my mother continues to pile up new and interesting observations on her own fish, invertebrates and aquatic amphibians.

Contributions You Can Make

Upon entering the world of zoos and public aquariums, I was quite surprised to learn that the observations of “non scientists” are the source of much of what is known about aquatic animals. Important facts are routinely uncovered by amateur naturalists and hobbyists observing their pets or exploring natural areas.

The potential for discovering new facts and, indeed, new species, is greatly increased for those with an interest in invertebrates (for example, a new species of centipede was recently discovered in NYC’s Central Park, on ground that I and millions of others trod daily). We are unaware, even to the nearest degree of magnitude, of the number of invertebrate species that inhabit the world, and are even more ignorant as to how they live their lives.

Record everything and anything that you observe as you pursue your hobby. You may wish to employ the help of interested friends and relatives in your endeavors. I have noticed that children and the elderly are often especially fascinated by live animals, and may gladly spend long periods of time watching your aquariums. Volunteers have long served as an “extra pair of eyes” for me in my work at zoos and aquariums, and I never cease to be amazed at all they reveal to me.

Observe, Discover and Share
Above all, be generous in sharing what you have seen and learned with others. Become involved with special interest organizations, and publish your findings whenever possible. The fact that an observation first appears as a note in an informal publication does not in any way lessen its importance – consider that Wallace’s theory of evolution, which closely paralleled Darwin’s, was revealed in a letter written to the latter, and spurred Darwin to publish his own findings.

The local newsletters of aquarium organizations are often the starting points for researchers interested in particular animals or environments. Please do not be trapped into believing that you must be a “professional” in order to contribute – as you will discover by reading about any animal, very little can replace direct observation as a means of discovering new information.

Using This Blog to Draw Attention to Your Ideas and Observations
Perhaps we can utilize this blog as a springboard for new ideas and facts. I would appreciate hearing about your observations of aquatic creatures. If you have seen something that you believe to be unique or perhaps unrecorded, please feel free to write in …I’ll be happy to look into it further, and to advise you on the possibilities of publishing or pursuing it further. Please do not hesitate to write in if you are unsure – over the years, observations that seemed not at all unusual to me have turned out to be quite the opposite – sometimes it’s hard to tell. Thanks, until next time, Frank.

Previous: Bristleworms. The Good, the Bad, the ITCHY!!
Next: A Natural Aquarium: Supplies and Care for the Planted Aquarium – Part 1 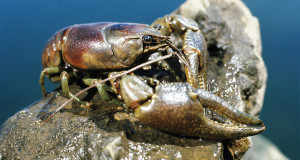