Crayfish have long been popular among aquarists as well as fishermen and naturalists alike.  But non-native species have taken their toll on native populations. The fight against invasive species has intensified in the waters of the Keystone State. To counteract the effects of invasive crayfish species on the animals living in and around the waterways of Pennsylvania, new regulations have gone into effect starting on January 1st, 2015. 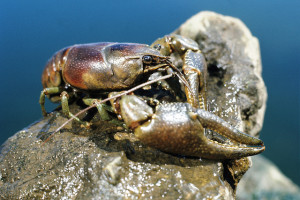 The Rusty Crayfish, the invader that started it all (Photo from the Wisconsin Department of Natural Resources, via flickr)

Crayfish are common enough and well-known to most of us who have spent some time in the waterways around Pennsylvania. I remember hunting under rocks for crayfish in the Swatara and Quittapahilla Creek close to my home when I was young.  Many, many years ago, I even had a pet crayfish for awhile that I “adopted” from a feeder tank at a local pet store. Pennsylvanians don’t eat crayfish nearly as much as some of our southern neighbors, but they have been a common bait to catch bigger fish.

Crayfish populations have been on the decline however. There are several species of crayfish that aren’t native to our waters that have been overtaking native populations or that have been spreading from their own local regions to new waters. The Kingpin of Crayfish Crime, the Rusty Crayfish (Orconectes rusticus), is the largest and most notorious of these and can be found in mind-blowing densities in some areas. Rusty Crayfish can grow almost twice as large as some other native crayfish and are much more aggressive.  This can lead to the smaller species being preyed upon or out-competed for food, the eggs and young of other aquatic life being preyed upon, and predators that may feed on other crayfish can’t feed on the larger and more aggressive Rusty’s. Researchers have concluded that crayfish released by irresponsible aquarium owners along with fishermen and boat owners have contributed in part to this invasion.

The Regulations on crayfish collection and commerce are nothing new to Pennsylvania. It has been against the law for anyone to sell or transport Rusty Crayfish since 2005 and the enforcement of the ban has been getting more and more stringent ever since. The new regulation that went into effect on January 1 adds all native and non-native crayfish to that restriction. No crayfish, native or otherwise, can be possessed, sold or transported, including some popular aquarium species like the Electric Blue Crayfish (Procambarus paeninsulanus) and the Mexican Dwarf Crayfish (Cambarellus patzcuarensis). With the proper license, up to fifty crayfish can be harvested per angler per day from Pennsylvania water but only after the head has been removed behind the eyes. Crayfish can still be used as bait, but only in the immediate water where they were taken from (for example, a crayfish from the Swatara Creek in Lebanon county can’t be taken and used as bait in the Susquehanna River in Dauphin County). Restaurants and research facilities have strict guidelines that allow them to have live crayfish for their specific use. 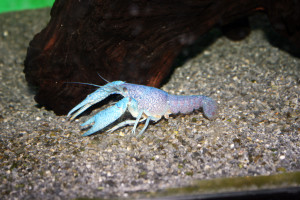 Even aquarium species like this Electric Blue Crayfish are affected by and restricted under Pennsylvania’s new regulations.

What Does This Mean For You?

For readers of this blog, this means that the days of keeping a pet crayfish are coming to a close in many areas. Keeping any crayfish species in an aquarium (or bait bucket) in Pennsylvania can land you in some hot water (pun intended). If you are reading this from somewhere outside of Pennsylvania, check your local regulations. Many other states and some parts of Canada have similar regulations in effect or in the works. All of these restrictions are for the Greater Good of our waterways and ecosystems and the loss of an aquarium hobby niche is a small price to pay. Even if your area isn’t affected by crayfish invasions or regulations, there are other invasive species that affect different areas; always practice responsible pet-keeping and never release any of your plants or animals into the wild.