Home | Aquarium Livestock | How to Care for Carnival Fish

How to Care for Carnival Fish

It is the time of year when carnivals and fairs pop up across the land, with games and rides and fun for all (well the kids anyway). What that brings to mind here at TFP are all the unsuspecting parents who have suddenly become the proud new owners of a pet fish that their kids have won as prizes in these games, and need to know how to take care of them. Every year we sell thousands of fish to carnivals as game prizes, and then find many people who need help with their new “prizes” after they get them home.  We’d like to take some time to review the most common fish found at your local carnival or fair. 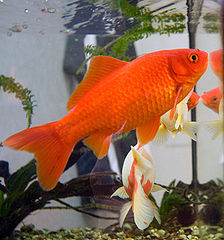 The practice of keeping goldfish (Carassius auratus) dates back to as early as 970A.D. when domesticated fish keeping began in ancient China. Farmers would impound carp as food fish, these carp where silver grey fish, like the wild carp found today. A genetic mutation in some of the carp gave them a yellowish gold color. The farmers would then selectively breed these colored carp, over time this selective breeding lead to what we now know as the modern goldfish. As the popularity of these fish grew, and they spread out from China, selective breeding of various mutations in the species has given rise to many different types of goldfish over the centuries. These different types of goldfish include the Oranda, Ryukin, Shubunkin, Comet, Lion head, Bubble eye and more. Goldfish are seen as good luck symbols in many oriental cultures and some breeds even have religious roots; the Celestial Eye goldfish were bred because monks believed their eyes looked towards the heavens.

Goldfish are peaceful fish that do well with other breeds of goldfish or other cold water fish. There are little to no issues with aggression, aside from the odd individual or “nippier” variety. It is not recommended to mix goldfish with tropical fish (tetras, guppies, etc) due to differences in water quality and temperature preferences. Goldfish prefer aquarium water temperatures from 60 – 74 degrees. Goldfish are commonly kept in outdoor ponds that will reach freezing temperatures in winter, provided it can not freeze solid, and a floating heater is used to insure constant gas exchange. Goldfish will tolerate a wide range of pH values, from 6.0 to 8.0, so long as conditions are stable.

Most types of goldfish will reach a maximum length of 6”- 8”, Comet and Shubunkin Goldfish can reach 12” or more. Goldfish can live up to 20 years given a proper diet and water conditions; there have been recorded accounts of goldfish living into their 40’s

Goldfish are easy to feed as the will accept virtually any types of fish food. Flakes or pellet formulas especially for goldfish are best. Avoid meaty foods, goldfish have a high vegetable requirement. Vegetable matter like algae sheets, cucumbers, or peas can be supplemented into the goldfish’s diet to help maintain optimal health.

Goldfish tend to be messy fish, with a big appetite, which leads to large amounts of waste. As a result monitoring goldfish’s water conditions is very important. It is not recommended to keep goldfish in unfiltered bowls, although it is possible if frequent (usually bi-weekly) water changes are consistently done and the water remains aerated. Live plants can be used, although they will usually end up eaten as the fish get bigger. The best environment for goldfish is an under stocked aquarium with ample filtration and regular maintenance.

The Betta fish, Betta splendens, is another commonly found “prize fish” that you may have the pleasure of become the new owners of. Bettas are one of the most beautiful freshwater fishes that are available in the aquarium hobby; their striking color and ornate finnage are quite remarkable.

Bettas are often chosen as prizes because of their ease of care, and ability to do well in very small amounts of water. The Betta is native to areas of Thailand, where they are exposed to times extreme rainfall and drought, which during times of drought can result in little more than a puddle to live in. Unlike most fish, the Betta does not solely rely on oxygen from the water it resides in, it has the ability to breathe air. Bettas are members of a group of fishes called Labyrinth fishes. Labyrinth fishes have a specialized breathing organ, called the labyrinth, which allows them to breathe air at the waters surface, somewhat like a primitive lung. The ability to breathe air allows the Betta to survive in very warm water with little or no dissolved oxygen. This is how Bettas are able to cope with very small fish bowls, and is often how they are displayed and sold.

PLEASE do not use this as an excuse to keep a Betta in extremely small environments for extended periods: although they can survive in only a few ounces of water, they will not be happy and comfortable.

Bettas can be kept in unfiltered bowls, provided adequate water changes are maintained (at least 20% per week), and water quality is monitored. Larger aquariums of at least several gallons are preferred, the bigger the better. There are a number of small desktop aquariums that are ideal for Betta keeping.
There is another side of the Betta fishes heritage that there is much controversy surrounding. Another common name for the Betta, is the fighting fish, or Siamese fighting fish. This name comes from the aggressive nature that these fish have towards one another, especially two males. The Thai name for these fish is”pla-kat”, which means biting and tearing fish. When placed in the same tank, two male Betta fish will literally fight to the death. There is a whole world of fighting and gambling involving the Betta in other cultures. Fighting Bettas is not considered an appropriate practice in the hobby.

There are many commercially produced Betta foods, in pellet, flake and freeze dried forms. A good varied diet is best. Feed only as much as the fish will eat in a few minutes, take extra care not to overfeed, especially in unfiltered bowls. Bettas prefer warm water, 72-78 degrees, so avoid cool areas like window sills, and hallways when possible. Direct sunlight should also be avoided; this will lead to unwanted algae growth, and temperature fluctuations during the day. While you can not keep bettas together, they can be kept in peaceful community tanks, with other types of fish.

If you have any futher questions about goldfish, bettas or other carnival fish, post them and I’ll be sure to answer. I hope that this has helped all you new fish owners out there, or even peaked the interest of anyone that is considering a fish.