Watching a pair of Lovebirds as they bond, and then court and rear their young is one of the most rewarding of all parrot-keeping experiences. Unlike many parrots, Lovebirds are often happy to settle down and breed in modestly-sized cages, and most make fine parents. But while mated pairs may produce clutch after clutch of eggs, aggression (to owner and mate), infertility, ailing chicks, and a host of problems can arise – many of which take owners by surprise. Today I’ll review some of the concerns most often brought to me by Lovebird owners, and others I’ve experienced while caring for these and other small parrots in zoos.

The commonly-kept lovebirds, such as the Peach-faced, Fischer’s and Masked, are not sexually dimorphic, in that males and females are identical in appearance (Abyssinian, Madagascar and Red-faced Lovebirds are sexually dimorphic, but these species are not common in the trade). Experienced breeders can often hazard a very good guess as to the sex of mature birds (via shape of the pelvic bones, overall size) but individuals vary greatly. The most skilled old-timer of my acquaintance estimated that he was correct 85% of the time.

If you can observe each bird for some time before buying, you’ll have a better chance of picking a pair. Females of commonly-sold species carry nesting material tucked into their tail feathers, and males tend to feed females rather than vice-versa…but some individuals try to reverse these activities! To confuse matters further, same-sex pairs often form.

While mated pairs usually get along very well, getting to the “mated pair” point can be trying for bird and bird owner alike. Lovebirds can be quite pugnacious (a group under my care at the Bronx Zoo bullied their small antelope exhibit-mates; please see article below), and are often very picky when it comes to mate selection. Also, captive conditions can affect hormonal output, so that the birds may come into breeding condition at different times of the year. Unwelcome mating attempts can lead to serious battles.

Lovebirds – even friendly, long-term pets – invariably become very protective of their nests and chicks, and often remain aggressive towards people throughout the breeding season.

Infertility is especially frustrating to owners (and, one would imagine, their pets!) because we become aware of it only after the normal incubation time has passed and we are expecting chicks any day (I do not recommend candling eggs to check for fertility…please post below for further info).

Infertility seems to be more common now than in years past, if my experience is any guide. Poor diet, inbreeding, age, genetics, and a host of other factors may be involved. Please see the article linked below for detailed information.

An Embarrassment of Riches

It is possible to do “too well” at Lovebird breeding.   Spurred by ample food and ideal living conditions, some pairs breed too often, draining the female’s calcium stores and jeopardizing her health.

Finding homes for the birds you produce can be a daunting task. Cute as they are, Lovebirds can be noisy and difficult to tame, and proper care takes a good deal of time, effort and money. They are not a good pet choice for most people. If you care about the fate of your birds – and all private breeders that I’ve met do – you may have quite a job finding appropriate homes for your youngsters.

Keeping and breeding Lovebirds takes time and money, even if all goes well. If medical problems arise, chicks are abandoned by parents, or you wind up keeping extra birds due to incompatibility, expenses can mount quickly.

It is not realistic to think that you will earn a profit (or even break even!) by selling baby Lovebirds, as small and large scale breeders typically produce more birds than the market can bear. Most pet stores have established relationships with breeders, and do not accept birds from others.

“Home-Bred” Does not Guarantee Good Pets

Lovebirds generally make great parents, and will vigorously resist attempts to check on or remove hatchlings. But if the young are left with their parents until they fledge, taming may be a long and ultimately unsuccessful prospect. Experienced keepers desiring human-bonded pets usually remove nestling Lovebirds at age 1-2 weeks, and hand-feed them. However, hand-rearing should not be attempted by novice breeders. Please post below for further information and references.

Some folks do quite well with a middle-ground technique. Young birds are removed from the nest and handled for a short time each day, after which they are returned. Owners are spared the difficulties of feeding the delicate chicks, and the birds tend to respond well to human contact after fledging. However, this process can evoke extreme stress in the protective parent birds. 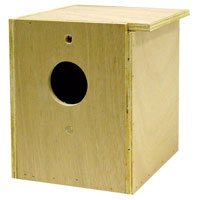 Wood shavings should cover the floor of the box to a depth of 2-3 inches. This will help to prevent the splay-legged condition that is often seen in chicks raised on hard surfaces.

Wild lovebirds carry fresh bark into their nests, possibly to increase humidity. Captive lovebirds will readily utilize moistened cypress for this purpose. Lightly spraying the female lovebird when she is out of the nest will also help in this regard (do not spray within the box itself).

Peach-faced and several other lovebirds tuck nesting material within their feathers to transport it to the nest…don’t miss watching this unique behavior if you have the opportunity. Uploaded to Wikipedia Commons by Toumoto

The Eggs and Chicks

Female lovebirds usually lay their first egg 7-10 days after copulation, with an additional egg being produced at intervals of 1-2 days thereafter.

Usually, the hen sits and is fed by the male. Male Masked Lovebirds, however, often sit near the hen, but it is not clear if they are actually doing anything useful!

The eggs hatch in 20-27 days, and the chicks leave the nest after 35-50 days. They are fed by their parents for an additional 2 weeks after fledging, by which time they are usually completely independent.

2015-01-28
Frank Indiviglio
Previous: Parrot Illness In Winter
Next: Why Do Lovebirds, Canaries and Others Abandon Nests or Destroy Eggs?