Home | Choosing the Best Cage for Canaries, Finches and other Small Birds | t5063 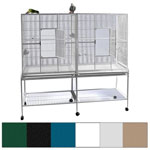