Overfeeding Your Aquarium – A Common Mistake and Its Consequences

Overfeeding your aquarium is one of the most common mistakes made by aquarium hobbyists, and it isn’t one only made by beginners. It’s easy to go overboard when our fish “always seem hungry” and even appearing excited when they see you coming towards the tank with food in hand.  Healthy fish pretty much always look hungry. It also doesn’t help that we’re directed by packaging instructions to feed amounts that may be inappropriate for the type and number of fish we are keeping. We want the best for our fish and we want to be successful in keeping them, but it’s easy to cross the line from feeding enough to feeding way too much.

Leaving uneaten food in the aquarium is never a good idea. Watching food fall to the bottom of the tank, with the thought that your fish to eat later, can lead to big problems. Many fish are kind of programmed to eat food at certain places in the tank. Surface feeders, column feeders and bottom feeders tend to feed within their comfort zones, so you won’t typically see surface feeders travelling to the gravel for a snack, and fish that feed in the water column usually ignore food bits after they settle. No matter what kind of fish food you distribute, pellets, flakes, frozen foods or even live feeders, anything not eaten is left to decay. This unprocessed food, in addition to the waste produced by the food that is actually digested, can quickly create issues with your tank’s water chemistry and/or cause a bloom in the population of naturally occuring scavengers.

Uneaten foods quickly start to decay, adding to ammonia and nitrate levels of the aquarium, and it can very easily result in more bacteria than the nitrogen cycle can handle causing cloudy water. Overfeeding is not only dangerous to the health of your fish, but it causes unnecessary demands on your filtration, often resulting in poor water quality. Fortunately, the problems that arise from overfeeding are quickly and easily reversed or eliminated once you get your feeding habits under control.

Aquarists are also often shocked or full of disbelief when we tell them that the hordes of unsightly little “bugs” or worms creeping up the glass and through the rock and substrate are a probably a result of over-feeding their aquarium. What you see are probably either scavenger nematodes or planaria. Chances are there were a few of these critters in your tank from the start. They can be introduced via fish, plants, wood or other things you add to the aquarium as their microscopic eggs can travel on any of these things. They are generally harmess, but when you overfeed the opportunity arises for their populations to boom with the abundance of decaying matter in the substrate. Reducing the frequency and amount of food will help to bring the population back down to size, but you may also choose to treat the tank with anti-parasitic medications to speed the process along. END_OF_DOCUMENT_TOKEN_TO_BE_REPLACED

My lifelong observations of captive and free-living fishes have led me to conclude that land-dwelling insects play an important role in the diets of many freshwater fishes.  As anyone with a pool or outdoor pond can imagine, untold numbers find their way into fresh and marine waters each day.  In 2009, the research of National Oceanographic and Atmospheric Administration biologists revealed that terrestrial insects comprise up to 100% of the diets of some US fish species. You can read more about this topic in the articles linked below. END_OF_DOCUMENT_TOKEN_TO_BE_REPLACED Utilizing its wing-like pectoral fins and unique musculature, the African Butterfly Fish can explode from the water’s surface to snatch low-flying dragonflies, moths and other insects, and to escape predators.  It does not, as far as we know, glide above the water as do marine Flying Fishes (please see photo). END_OF_DOCUMENT_TOKEN_TO_BE_REPLACED

Shrimp of various species play an important role in the natural diets of many freshwater fishes, and the nutrients they supply differ from those found in insects and other more commonly-used aquarium foods.  Many native and exotic fishes under my care at home and in zoos prefer shrimp to all else, and do well when they are added to the diet.  And while ocean krill (not a true shrimp) is readily available, I wonder about the long range effects of feeding a marine animal to freshwater fishes. 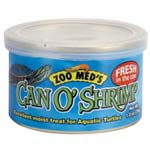 Unfortunately, freshwater shrimps are difficult for the average aquarist to procure. I was, therefore, pleased when Zoo Med began offering canned freshwater shrimp.  Although marketed as a reptile food, I have fed canned shrimp and find them to be some of the best foods for freshwater aquarium fish, showing great results.  But I’ve been remiss in spreading the word among my hobbyist friends…if you decide to give them a try, please post your thoughts below, thanks.

Seahorses in the Aquarium – 5 Things You Should Know Before Purchasing

Hello, Frank Indiviglio here. In 2001, I wrote a book about the Natural History and Care of Seahorses. As I intended, many readers were discouraged, due to the demands involved in their care and the fragile state of wild populations. Today, I am happy to report that captive-born individuals of several species are regularly available, and that the task of feeding them (a major stumbling block) has been greatly simplified.  Still, they are not ideal for every aquarist. Following are some important points to consider before you decide to keep these intriguing but challenging fishes.

The world’s 130+ seahorse species (Family Syngnathidae) are strict live food specialists. Brine shrimp, the most easily-obtained seahorse food, is suitable as a steady diet for only one, the Dwarf Seahorse, Hippocampus zosterae (please see this article). Most others avidly consume brine shrimp, but will not survive long without amphipods (scuds, side-swimmers), sand hoppers, tiny shrimp, Mysids and similar marine creatures. END_OF_DOCUMENT_TOKEN_TO_BE_REPLACED