Monsters from the Deep?

When most people think of giant fish, they imagine some behemoth dwelling at the bottom of the ocean. While the world’s oceans certainly have their share of massive fishes, most people are probably unaware of what may be lurking in the freshwater lakes and rivers of the world, some of them right here in the U.S.

What brought this blog to mind was a recent article that I came across that chronicled the recent capture and tagging of a Giant Freshwater Stingray by British Angler and Scientist, Ian Welch. 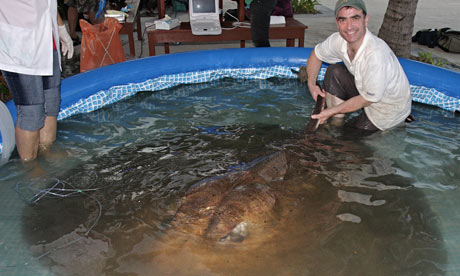 The Stingray that Ian Caught is thought to be one of the largest fish ever caught of rod and reel. The Giant Freshwater Stingray (Himantura chaophraya) was caught in Thailand’s Maeklong River while on a research expedition. This stingray was estimated to be over 265kg (584lbs) and over 3.5m long. Some reports exist of these giants reaching sizes of 16.5 feet (5 meters) long and weighing up to 1,320 pounds (600kg). That is a big fish!

Not to be outdone is another giant native of Thailand, the Mekong River’s Giant Catfish (Pangasianodon gigas), which can reach lengths over ten feet and 650 lbs pounds. Both of these Thai giants are endangered species, and have been overfished for many years.

China has its share of freshwater giants also. One of the most bizarre giant freshwater fish of the world is the Chinese paddlefish (Psephurus gladius). This giant has been said to reach an amazing

23 feet (7 meters) in length and weigh up to half a ton (450kg). Another Chinese monster fish is the Giant White Sturgeon. The Giant White Sturgeon, who along with the Paddle fish is native to the Yangtze River, reaches 12 feet and weighs more than 950 pounds. Sadly, both of these fish are on the brink of extinction in China due to overfishing, pollution, and loss of habitat.

The Americas have their share of freshwater giants as well. Native to the Amazon River basin in South America, the Arapaima (Arapaima gigas), can reach lengths of 10 feet and weighing as much as 400 pounds or more.

North America has a few noteworthy big fish, too. The Alligator Gar can weight up to 300 pounds and is commonly found along the Mississippi River basin, as well as many other southern states. They are very common to Florida’s Everglades. The Alligator Gar can reach up to 10 feet, and some historical accounts have them even larger than that! North America also has some large sturgeon species native to its waters. The White Sturgeon can be found in the rivers and estuaries of western Canada, and Northwest United States. I am not sure if this is the same species that is found in China, but in 2005 an 11 foot, 1000lb specimen was caught in British Columbia’s Frazier River.

Lake sturgeons (Acipenser fulvescens) are common to the great lakes, and many other large cold water lakes in northern states, These fish have many accounts of specimens topping six feet (two meters) long and weighing over 200 pounds (90 kilograms).

So as you can see, there are quite a few large freshwater fish, you don’t need to explore the far reaches of the ocean to find them, some may be in your neck of the woods.

One thing that I must also mention is that some of these fish are sometimes seen for sale as aquarium fish. Obviously, none of them are suitable for aquariums and should not be kept as such.

Until next time,
Dave