December 6, 2013 Comments Off on The Best Holiday Gifts for Parrots and Parrot Owners 8814 Views Providing your pet with a larger cage is one of the most important steps that you can take to ensure its good health and longevity. My observations of parrots, both in the wild and under my care in zoos, have convinced me of this. Appropriately-sized cages allow our birds to engage in a greater variety of behaviors and, by reducing stress, help to limit health-care expenses. 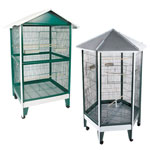 Training is often simplified, as parrots kept in tight quarters are difficult to interact-with.
END_OF_DOCUMENT_TOKEN_TO_BE_REPLACED All are excellent mimics, and need little if any encouragement to copy sounds and words.  Naturally social, crows quickly bond to their owners and may even learn to respond to simple commands.  Their great intelligence is accompanied by a sensitive nature…despite being quite bold, Pied Crows are easily stressed by unthinking behavior on the part of their owners.  They will not forget actions they perceive as threatening, so be careful not to make any mistakes…please post below for further information. END_OF_DOCUMENT_TOKEN_TO_BE_REPLACED

Working with Penguins – a Highlight of this Zookeeper’s Experiences

October 16, 2012 Comments Off on Working with Penguins – a Highlight of this Zookeeper’s Experiences 6176 Views

Penguins Win Me Over

I first became enamored of penguins at the Bronx Zoo’s old “Penguin House”. Twice a day, a door would open and a pail of fish would be tossed into the exhibit.  Fashioned like a giant aquarium, the exhibit allowed visitors to watch the penguins dive and grab their meals underwater.  Living near the zoo, I had long haunted its grounds and had racked up some great sightings of both captive and wild birds by an early age (nearly 300 native species have been recorded there) – but these creatures were something else indeed!  They were birds, to be sure, but departed so radically from the typical bird body-plan that I was driven to learn all I could.

Today, of course, penguins are well known, but for us bird fanciers they still retain a sense of mystery…more so as new facts about their amazing lifestyles come to light!  END_OF_DOCUMENT_TOKEN_TO_BE_REPLACED

Tawny Frogmouths are placed in the family Podargidae, along with 14 relatives.  Three Tawny Frogmouth subspecies – the largest being 3x the size of the smallest – have been described.  Other species include the Papuan Frogmouth, of the Cape York Peninsula and New Guinea, and the Marbled Frogmouth, a rainforest dweller found in northern Queensland and New Guinea. END_OF_DOCUMENT_TOKEN_TO_BE_REPLACED

After a year of failed attempts, I managed to land an interview for a position as bird keeper.  As the curator and I walked and talked, I caught sight of a group of unusual birds, and stepped closer.  I thought they might be Pink Pigeons, Nesoenas mayeri.  I was shocked, as there were but 12 individuals left in the wild at the time, and captive breeding efforts had only just begun. END_OF_DOCUMENT_TOKEN_TO_BE_REPLACED