Finding the perfect new addition to an aquarium is often like finding the Holy Grail to many aquarists. We all want the perfect little helper to keep the tank clean so there’s less work for us to do (and so our tank is cleaner and healthier, of course) but many “algae eaters” get too large for smaller aquariums and many others like the group of fish known as “plecos” don’t even eat algae at all. So what are the best plecos and algae eaters for small freshwater aquariums? Here are a few of our favorites that are some of the best choices for smaller community aquariums: 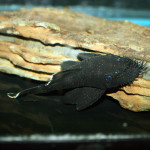 Plecos from the genus Ancistrus usually have “Bristlenose” or “Bushynose” somewhere in their common names, a nickname that comes from the whisker-like frills that develop on most adults. They are usually more prominent in adult males but some females may get them too in some species. Different species in this group have different requirements, but they are generally among the smallest plecos. While they eat some meatier foods as well, most appear to eat mostly vegetation. 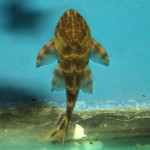 The Clown Pleco is a popular small pleco. As with other Panaque plecos, these fish are omnivores and feed about equally on plants matter and meatier foods. Panaque plecos are also unique in that they actually feed on driftwood as well; make sure you have driftwood décor in your tank for these fish to graze on. 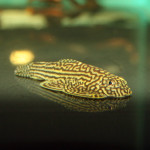 Hillstream Loaches have flattened guitar-shaped bodies and are often mistaken for plecos. They cling to rocks in the fast-moving mountain stream where they come from much like plecos cling to surfaces. Hillstream Loaches need well-oxygenated and well-filtered tanks and don’t do well with nippy tankmates or in tank with less-than-pristine water quality. They do eat some algae however, as well as other detritus and leftover sinking foods. 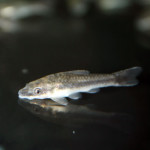 There are a few very similar species that are commonly grouped together as Otocinclus Catfish (“Oto Cats”) or “Dwarf Suckermouth Catfish”. Most are brownish-grey in color with a black stripe but some like the Zebra Oto (Otocinclus cocama) have a more ornate pattern. These fish stay under two inches in length and are great for eating algae off of plants without harming the plants. They can be a bit finicky and sensitive though so only keep in a stable, healthy aquarium. They are also best kept in groups so plan tankspace accordingly. 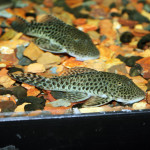 Like the Clown Pleco, Rubbernose Plecos are some of the most common smaller plecos available. They also have a very familiar pleco-like appearance that many novice aquarists associate with algae control. They are not exclusive algae-eaters however; this is another omnivore that needs about equal parts meaty food and plant matter. These fish are pretty middle-of-the-road overall: moderate adult sizes, eats diet for about half their diet, neutral coloration, moderate temperament. 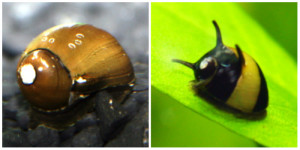 Nerite Snails are popular for saltwater aquariums but some species are found in freshwater as well. These snails are much smaller than some of the other less-suitable and more invasive freshwater snails like Apple Snails or Trapdoor Snails. They mainly eat smaller algaes like the ones that cause spots on glass but usually won’t harm plants. These snails also appear to bred less frequently in most aquariums than the more common Apple Snails. Make sure the ones you get are from freshwater; a saltwater Nerite will not survive being moved to a freshwater tank. 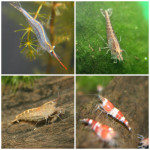 Small freshwater shrimp like the popular Cherry Shrimp and Amano Shrimp can be ideal grazers, especially for nano tanks (under 1-2 gallons). Some are clear, some are colored or have colored markings and they can be kept in groups. However, most of these shrimp are very small; you may not see them often and can’t be kept with anything remotely predatory.

As always, the best algae-eater for your tank depends on its tankmates, the size of the tank, the water parameters and other such factors but hopefully this helps give you some alternatives to fish that may be too big or otherwise unsuitable to your needs. If you need more help in making your best choice or have a favorite of your own, feel free to comment below!

Hello, Jason here. Over the years the aquarium trade has progressed to cater to the demands of consumers and to comply with the prevalent eco-issues at the same time.  Now more than ever, consideration is also given to the impact the trade has on native populations and the integrity of  stock. The livestock in the aquarium trade is increasingly supplied by breeders captive bred or captive raised fish.  Some fish are bred for color, behaviors or another reason that makes them unique and interesting to the potential buyer. While this is good as it helps protect wild populations from being over harvested, it does bring up another

problem that appears within the aquarium trade from time to time. Breeders are constantly trying to keep up with the growing demand for fish, so their methods may not always produce the best quality of fish. This is often most noticeable among Cichlids, especially African Cichlids, though some of the better known hybrids commercially available are derived from New World Cichlids.

Some breeders are more concerned with quantity and saleability that the integrity and quality of the fish they are producing for the trade. Hybrid fish result when two distinct species produce offspring together, sharing qualities of both species. Fish with physiological deformities may result as with Bloody Parrots, but at the very least, captive hybridization can obscure or pollute pure genetic lines that should be kept pure, from a conservation stand point.  Defects can be small like an abnormal color pattern or body shape, or more advanced. Many hybrids will look very similar to one of the two species that it came from, but it may have unique coloration or slightly different shape. Some of these hybrid fish may never show any sign of distress as a result of their questionable lineage. Some hybrid fish are born sterile.  Fish of poor breeding like this may have issues surviving or thriving in the aquarium.  They may have trouble feeding or swimming, especially with tankmates that do not have similar disadvantages.  If they do have a defect that is enough to effect these abilies, they will not have the ability to thrive without special attention in many cases. Some hybrids may also have difficulty in fending off disease.

Some breeders choose to selectively breed species, typically to develop or reproduce a specific mutation that occurs within a species, but is not found in the wild.  These are often carefully bred for a specific result such as elongated fins or to enhance a particular color that some fish bear naturally to some degree.  These fish still maintain their species integrity, but display more prominently the desired trait they were selected for.  True conservationists may shy away even from these selectively bred variants to maintain the most naturalistic display possible, though color variants are usually more acceptable than hybrid fish.

Keep quality in mind when looking for a new fish for your aquarium. Reputable breeders take pride in the fish they produce, and are careful to breed good stock, with pure lines to preserve the integrity of the species they are helping to conserve.  There are many breeders that selectively breed purebred strains that have brighter coloration and better health because the species lines are kept pure. These are the fish you want to look for to keep in your aquarium.