Back in January, I posted a blog about some of the changes and upgrades to the fish room here in our retail store.  Over the past few weeks we have gotten back to working on our upgrades, and I wanted to start a series of blogs to let folks know what is going on.

Along with the new coral propagation system, we are also working on some upgrades to the coral holding systems in the retail store.  The first upgrade is the lighting on the main coral tray.  For those of you that have never visited our retail location, the main coral tray is a pretty cool, and quite unique, aquarium.  The tray is a 20 foot long, 4 foot wide, acrylic aquarium that can be viewed from both the top and sides.  It is one of the largest tanks of this style in the world; I have never seen another like it.

The Coral Tray has been refitted with new Sunlight Supply ballasts and fixtures.  The reflectors are the large Lumenmax

models, and they are powered by Sunlight Supply’s Galaxy electronic metal halide ballasts.  There are 4 of these fixtures on the tank, running 400watt 20K XM metal halide bulbs.  The 4 fixtures are mounted to a moving rail system, which allows each fixture to travel over a 4 foot area.  Along with looking good, and satisfying the gadget geek inside of me, the system is also very energy efficient due to the electronic ballasts and moving rail system.  The huge tray is now being lit by only four 400watt halides (Plus a stationary Aquatic Life HID fixture mounted to one end).

In this first blog about the coral propagation system, I can only give you a sneak peak of the system; it is still a couple weeks away from completion.  The plan is to get this initial system online, then over time add additional systems as we acquire and establish our brood stock and grow out protocols.

The coral propagation system will consist of four 120 gallon raceways that are connected to a main sump that will contain the protein skimmer.  There will also be a brood stock tank that will recirculate on the main sump as well.  As you can see in the pictures, we are well into the plumbing and electrical systems of the prop room. Next will be the lighting systems, then we will fill and test the water flow in the system.  More blog entries will follow as the system gets closer to operation.  Hope  you enjoy the pictures of the progress so far.

Algae in Freshwater Aquariums and Ponds: a Primer – Part 1

Hello, Frank Indiviglio here.  I must confess that I like algae, perhaps because many of the creatures that I favor – shrimp, tadpoles, snails, loaches and others, do best in algae-rich tanks.  I’ve even encouraged algae to grow on the backs of aquatic snakes and turtles in zoo exhibits, much to the chagrin of the higher-ups!

But, of course, algae certainly can get in the way of enjoying one’s pond or aquarium, and may endanger the health of the animals living therein as well.

Algae, which are not true plants, exist in a bewildering number of species.  For our purposes, we can roughly classify the commonly-encountered varieties as follows:

Nitrates and phosphates are the primary nutrients utilized by the most types of algae…limiting their concentration is the key to effective and safe algae control.

Algaecides and other “quick fixes”, while effective in the short term, do not address the root of the problem.  I always recommend that aquarists take the time to identify the reasons that algae has become established.  I have found this to be the most effective approach to algae control, be it in a betta bowl or a 77,000 gallon zoo exhibit.  And, because we learn much along the way and often utilize a number of fascinating animals and plants, the process is also very rewarding.

I’ll first discuss control methods that can generally be described as “natural” and will then mention a few more intensive alternatives.

The most effective algae enemy we might employ comes, surprisingly, in the form of another one-celled “non-plant/non-animal” – bacteria.  Many species consume the same nutrients as do algae, and can out-breed and out-compete even the hardiest types.

A number of species of beneficial aerobic bacteria (those requiring oxygen, which are also vital to water quality) will colonize gravel, filter media and other surfaces bathed in aerated water.  They will build up incredibly dense populations over an under-gravel filter, rendering it very difficult for algae to get a foothold.

Nutrafin Cycle, which contains living bacteria, is especially effective in introducing these organisms to aquariums.  A number of other supplements, effective in fresh water and marine aquariums, are also available. Aquatic plants are very effective in capturing the nutrients needed by algae and limiting their growth.  However, many do not reproduce vigorously, so plantings should be as dense as possible.  In some situations, carbon dioxide supplementation and the use of plant food and iron might be useful.

If you are not ready to tackle aquatic plant gardening, you might consider using certain hardy terrestrial plants that thrive in water.  As long as their leaves can break the surface, peace lilies, pothos and aluminum plants will fulfill much the same role as true aquatic plants, and their root systems make for wonderful underwater effects.

Next time I’ll discuss how fishes, invertebrates and water additives can be used to combat algae.  Until then, please write in with your questions and comments.  Thanks, Frank Indiviglio.

Hello, Frank Indiviglio here.  Please see Part I of this article for information on the care of freshwater shrimps, and for profiles of other popular species.  Today I’ll highlight a few beautiful, lesser-known species in the genus Caridina and Brazil’s yellow-bellied grass shrimp. A relative newcomer to the trade, the rhino shrimp is already quite popular.  In its native India, this shrimp inhabits salt marshes and, while it thrives in freshwater, it will not reproduce without exposure to brackish water.  It also differs from other shrimps in its propensity to swim rather than crawl.

Dwelling in Thailand and perhaps elsewhere in Southeast Asia, this shrimp-fancier’s favorite is boldly marked with a broad white band about the body and a white-tipped head.  At 1 inch in length, it is large enough to make quite an impressive display when kept in groups.

One of the few South American species in the trade, this hardy 1.5 inch long fellow is best kept in cooler waters than the aforementioned species, and is an excellent choice for an outdoor pond.  It does best at temperatures of 68-70 F, but will remain active and healthy in colder conditions as well.

For information on keeping amano, cherry and bamboo shrimps, please see An Introduction to Freshwater Shrimps.

To learn more about a truly unique shrimp, please check out my article Keeping the African Giant Filter Shrimp.

Bamboo Shrimp referenced from Wikipedia and originally posted by Faucon

The Olive Nerite: an Algae-Eating Snail for Fresh, Brackish or Marine Aquariums

Hello, Frank Indiviglio here.  I’m partial to snails…from tiny stream dwellers indigenous to the spray zone of one waterfall in NY to the huge lumbering African land snails, all that I’ve worked with have been fascinating.  But aquarists often have a love/hate relationship with snails, searching for one that will consume unwanted algae while not eating plants or over-populating the tank.  Enter the olive nerite, a/k/a black marble or Alexander snail (Vittina usnea, formerly Neritina reclivata alexandre). Amazingly, this adaptable snail, native to brackish water habitats in Florida and throughout the Caribbean and Gulf of Mexico, thrives equally well in fresh, brackish or marine aquariums.  It will, however, only reproduce in brackish or marine waters, and so is an ideal choice for freshwater aquarists who fear snail population explosions.

In the wild, the olive nerite ventures far up rivers, often being found miles away from the sea.  It seems unlikely that such a small creature would migrate back to the ocean to reproduce, so it may breed at the river’s bottom, where denser marine waters penetrate at high tide.  It is theorized that this unusual mollusk may be in the process of evolving from a marine to a purely freshwater creature.

Olive Nerites in the Aquarium

Another point to recommend the olive nerite is the fact that it feeds only upon the brown and green algae that often coats plant leaves, rocks and aquarium glass, and leaves living plants untouched.  When algae populations decline, its appetite can be easily satisfied with algae wafers  and Spirulina discs.

The attractive shell of marble-sized olive nerite is often colonized by tiny barnacles, adding to its interesting appearance.  They are as resilient to environmental conditions as they are to habitat changes, doing well at temperatures ranging from the upper 40’s to the upper 90’s (F) and in waters of 6.3-8.4 in pH.

Two purely marine relatives of the olive nerite, Neritina  funiculata and Vittina luteofasciata, are sometimes offered for sale as well.  They have wider appetites than their more popular cousin, but do best in marine aquariums that support red and brown algae.

Detailed information and a key to the snails of Florida has been posted by the Florida Museum of Natural History at http://www.flmnh.ufl.edu/malacology/fl-snail/snails1.htm.

Image Neritina reclivata is of a related species, referenced from Wikipedia and originally posted by ictheostega.

Rare Sea Turtle pays a Visit, and Leaves a Gift, at a Virgin Islands Resort

Hey everyone, Eileen again with a quick and interesting bit of news!

One of our former TFP colleagues recently shared with us an exciting experience, and I wanted to pass it along. Erica Palmer, an assistant curator at Coral World in St. Thomas and a former That Fish Place Fish Room Supervisor, knew that the story would peak our interests, and she is sooo lucky for being able to be a part of it.

During my college days, I participated in loggerhead sea turtle nesting studies and research along the South Carolina coast. Our volunteers would walk the beach every morning looking for the telltale “crawl”, the tracks made by the female turtle as she crawled up the beach to lay her nest, but we very rarely ever caught a glimpse of the turtle in action. 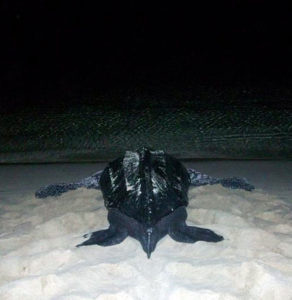 Visitors to a beach resort in the Virgin Islands got to witness the proverbial “Holy Grail” of turtle nestings when a very rare Leatherback Turtle crawled right up to the line of beach chairs in front of guests and hotels workers alike to lay her eggs!  Erica  is quoted in an article as saying that the rare late season nest is likely the last one that this turtle had the urge to lay before heading back out to sea to the turtles’ feeding grounds. The nest is now under surveillance by the resort to help keep the eggs safe. The nest is due to hatch in mid to late September.  I hope she sends us an update!

Visit the article on National Geographic’s website for more information on this exciting event: http://blogs.nationalgeographic.com/blogs/news/chiefeditor/2009/07/leatherback-turtle-virgin-islands.html